Free Folger Friday: "Under that habit play the knave" (2017) 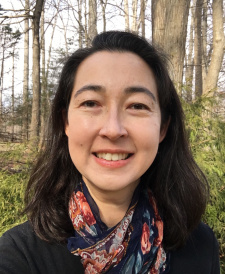 Free Folger Friday: "Under that habit play the knave": Playing and Gender in As You Like It, one of the Talks and Screenings at the Folger, was held in the Folger Theatre on Friday, February 17, 2017 at 6:00pm.

Dr. Elisa Oh led a discussion on gender identity both in As You Like It and broadly in Shakespeare’s plays.

Elisa Oh is an Associate Professor in the English Department at Howard University in Washington, DC, where she teaches Shakespeare, British literature, literary theory, and women in literature classes. She has published on Shakespeare’s Cordelia and Isabella, Queen Elizabeth I, Mary Wroth's Urania, and Ben Jonson's The Masque of Blackness. Her essay, "Advance and Retreat: Reading English Colonial Choreographies of Pocahontas," appears in Travel and Travail: Early Modern Women, English Drama, and the Wider World edited by Patricial Akhimie and Bernadette Andrea. Her current book project examines early modern English representations of gender and race in choreographed movements such as dance, travel, and ritual.