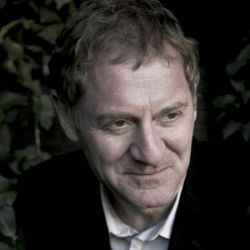 Elected a Fellow of the Royal Society of Literature in 1984 and knighted in 1999, Motion served as Poet Laureate of the United Kingdom from 1999 to 2009. He is the co-founder and co-director of the Poetry Archive (UK) and Poetry by Heart. His other honors include the Arvon Observer Prize and the Somerset Maugham Award, among many others.

He currently teaches at The Writing Seminars at Johns Hopkins University.

A Glass of Wine

Exactly as the setting sun

clips the heel of the garden,

exactly as a pigeon

and ends up moaning,

exactly as the ping

dies into a flock

a shapely hand of cloud

emerges from the crowd

of airy nothings that the wind allowed

to tumble over us all day

and points the way

towards its own decay

so steadily, so slow

it shows you everything you need to know

about this glass I’m holding out to you,

enough to bear the whole weight of the sky.