The O.B. Hardison Poetry Series, co-sponsored with the National Gallery of Art, presented the Folger Poetry Board Reading: Billy Collins on May 10, 2021 at 7:30pm as a live virtual reading.

Each year, the Folger Poetry Board, supporters of the O.B Hardison Poetry series, selects a distinguished poet to share their favorite poems from other poets and to read from their own work. This year's Folger Poetry Board reader was Billy Collins, named “the most popular poet in America” by The New York Times and a former United States Poet Laureate. 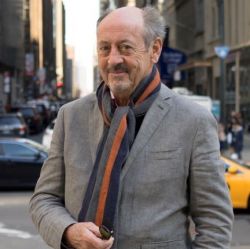 Billy Collins is the author of several volumes of poetry, most recently Whale Day, and his many honors and awards include the Poetry Foundation’s Mark Twain Award for Humor in Poetry.

From "Introduction to Poetry"

…I say drop a mouse into a poem

and watch him probe his way out,

or walk inside the poem’s room

and feel the walls for a light switch.

I want them to waterski

across the surface of a poem

waving at the author’s name on the shore…

Excerpt from Billy Collins from The Apple that Astonished Paris. Copyright ©1988, 1996 by Billy Collins. Reprinted with the permission of the University of Arkansas Press.