The O.B. Hardison Poetry Series, co-sponsored with the Poetry Society of America, presented the Emily Dickinson Birthday Tribute reading on December 12, 2016 at 7:30pm in the Folger's Elizabethan Theatre. “The surfaces of a Tracy K. Smith poem are beautiful and serene, but underneath, there is always a sense of an unknown vastness. Her poems take the risk of inviting us to imagine, as the poet does, what it is to travel in another person’s shoes.” -Toi Derricotte 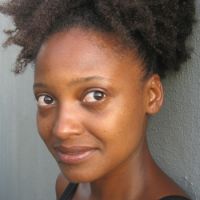 Tracy K. Smith has created verse that probes the universe, both interplanetary and inside ourselves. Smith is the author of the critically acclaimed memoir Ordinary Light, a finalist for the 2015 National Book Award in Nonfiction and selected as a Notable Book by the New York Times and Washington Post. Her most recent collection of poems, Life on Mars, won the 2012 Pulitzer Prize and was also a New York Times Notable Book. In June 2017, Smith was named U.S. Poet Laureate. She is the Chair of the Lewis Center for the Arts, Roger S. Berlin '52 Professor of the Humanities, and Professor of Creative Writing at Princeton University.

Smith has read for the O.B. Hardison Poetry series previously, on January 12, 2009.

From "Don't You Wonder, Sometimes?"

After dark, stars glisten like ice, and the distance they span

Or cosmic ace hovering, swaying, aching to make us see.

And what would we do, you and I, if we could know for sure

That someone was there squinting through the dust,

Saying nothing is lost, that everything lives on waiting only

To be wanted back badly enough?