The O.B. Hardison Poetry Series, co-sponsored with the Emily Dickinson Museum, presented the Emily Dickinson Birthday Tribute reading on December 9, 2019 at 7:30pm in the Folger's Elizabethan Theatre. Poet Tom Sleigh read his favorite Dickinson poems and shared from his own work. Artist Lesley Dill shared her Dickinson-influenced work. Following the presentation, the two artists had a conversation about their shared muse.

Lesley Dill works with paper, wire, horsehair, photography, foil, bronze, and music. Her artworks are in the collections of over 50 museums, including the Metropolitan Museum of Art. Her opera based on Dickinson’s poems, Divide Light, was performed by New York’s New Camerata Opera Company in 2018. 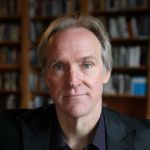 Tom Sleigh's ten books of poetry include Army Cats (John Updike Award) and Space Walk (Kingsley Tufts Award). His book of essays, The Land Between Two Rivers: Writing in an Age of Refugees, was published as a companion piece to his latest book of poems, House of Fact, House of Ruin.

From "Song That Can Only Be Sung Once"

some other sky something like glory smiles on us,

on the way the sea stretches out to the horizon—

but us, we’re blown by chance the way wind blows

blades of grass lightly blowing them all one way.

Excerpt from “Song That Can Only Be Sung Once” from Army Cats © 2011 by Tom Sleigh. Used with permission of Graywolf Press.