The O.B. Hardison Poetry Series, presented the Emily Dickinson Birthday Tribute reading on December 8, 2014 in the Folger's Elizabethan Theatre. “I am afraid to own a Body—/I am afraid to own a Soul.” As physician and poet, Dr. Rafael Campo bridges the worlds of arts and science in this annual poetry reading in honor of Emily Dickinson, whose poetry (quoted above) explores both the physical and the metaphysical, the all-too-mortal body and the immortal soul. After the reading the rum and fruit flavored “black cake”-made from Dickinson’s own recipe-was served.

This event was in association with the Emily Dickinson Museum. 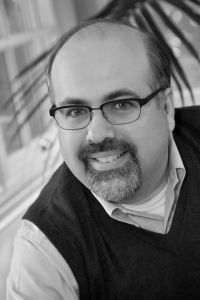 Rafael Campo is the author of many poetry collections, including Alternative Medicine (2013); The Enemy (2007), which received the Sheila Motton Book Prize from the New England Poetry Club; Landscape with Human Figure (2002); Diva (1999), a finalist for the National Book Critics Circle Award; What the Body Told (1996), winner of a Lambda Literary Award; and The Other Man was Me (1994), winner of the National Poetry Series.

Campo has read for the O.B. Hardison Poetry series previously, on September 18, 1997.

V. Elegy for the AIDS Virus

How difficult it is to claim one’s right

to living honestly. The honesty

you taught was nothing quite as true

as death, but neither was it final.

From Diva © 1999 by Rafael Campo, published by Duke University Press. Used with permission.