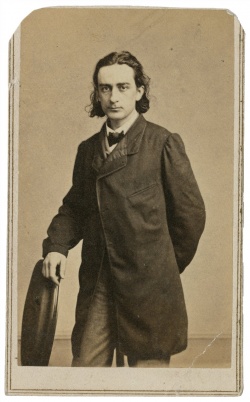 was a Shakespearean actor, theater owner, and editor of theatrical playbooks. Booth came from a theatrical family, and his father, Junius Brutus Booth, had a significant reputation as an actor. Booth was best known for his Hamlet, a part he famously played for a hundred nights. In 1863, he managed the Winter Garden Theatre in New York City and bought the Walnut Street Theatre in Philadelphia the same year. Booth's Theatre was founded at the corner of 23rd street and 6th avenue in New York City in 1869. Booth's theatrical career was briefly interrupted when his younger brother, John Wilkes Booth, assassinated President Lincoln.

---. The complete works of Shakspere : revised from the original editions / with historical and analytical introductions to each play, also notes explanatory and critical and a life of the poet by J.O. Halliwell and other eminent commentators (London ; New York : London Printing and Publishing Company, [185-]). Call number: PR2755.H3 B3q Sh.Col.]

In addition to books owned by Booth, the Folger has a number of items related to his life, including a bracelet made from Edwin Booth's hair and inscribed "Mother," and a number of his costumes. 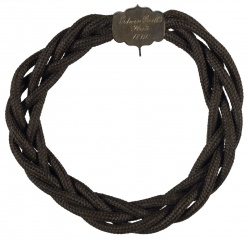 Booth signed several works in the Folger's collection, and others are inscribed by Booth to recipients, for example, The Works of William Shakespeare: from the text of Clark and Wright in inscribed by Booth to Wm. Rutledge, with complements, and dated Mar. 26, '89. Call number: PR2754 1o2 copy 2 Sh.Col.

The Folger has a significant collection of Booth's correspondence, which discusses at length the process of writing and publishing prompt books as well as Booth's own collecting and reading habits. For more information, see the Edwin Booth finding aid here.