The O.B. Hardison Poetry Series presented Drama & Verse: Simon Armitage and Peter Oswald on February 03, 2015, at 7:30 pm in the Folger's Elizabethan Theatre. This evening celebrated the intersection of theater and poetry with acclaimed British poet/playwrights Simon Armitage and Peter Oswald. Folger Theatre mounted Oswald’s celebrated translation of Friedrich Schiller’s Mary Stuart from January 27 to March 8, 2015. This was an unforgettable exploration of the shared power of language – how it is read, peformed, and experienced. 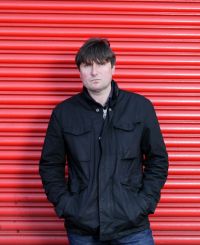 Simon Armitage is the author of numerous collections of poetry, including Magnetic Field: The Marsden Poems (2020); Sandettie Light Vessel Automatic (2019); The Unaccompanied (2017); Paper Aeroplane: Selected Poems 1989–2014 (2014); Seeing Stars (2010); Tyrannosaurus Rex Versus the Corduroy Kid (2006); The Shout: Selected Poems (2005), which was short-listed for the National Book Critics Circle Award; Kid (1992), which won the Forward Prize; and his first collection, Zoom! (1989), a Poetry Society Book Choice. Several of his collections have also been short-listed for the Whitbread Prize and the T.S. Eliot Prize. He has won an Eric Gregory Award and a Lannan Award, and was chosen as a Sunday Times Author of the Year. His translation of Sir Gawain and the Green Night (2007) from Middle English was selected as a Book of the Year by both the New York Times and the Los Angeles Times. His other translations from medieval English include The Death of King Arthur (2011), which was awarded the Poetry Society Choice Hay Medal for Poetry, and Pearl (2016).

Peter Oswald is widely lauded as one of England's most daring and innovative playwrights, Peter has written over twenty-five plays produced at Shakespeare’s Globe, the Royal National Theatre, the Apollo Theatre, the Lyric Studio Theatre, the Gate Theatre, the Finborough Theatre and numerous other venues. He was writer-in-residence at the Globe from 1998-2005; and his version of Schiller’s Mary Stuart, directed by Phyllida Lloyd, went from the Donmar Warehouse to the West End and Broadway. Peter specialises in plays written in verse form, welding his deep knowledge of classical literature and dramaturgy to a sharply modern sensibility. His plays and books of poetry have been published by Oxford University Press, Oberon Books, and New Generation Publishing.

I’m ugly because I associate piano wire with strangulation.

You’re beautiful because you stop to read the cards in

stick and a big stone.

You’re beautiful because for you, politeness is instinctive, not

I’m ugly because desperation is impossible to hide.

From Tyrannosaurus Rex Versus the Corduroy Kid copyright 2013 by Simon Armitage, published by Random House. Used with permission.