Curator Talk: Heather Wolfe on Shakespeare, Life of an Icon (2015) 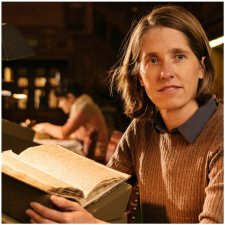 Curator Talk: Heather Wolfe on Shakespeare, Life of an Icon, one of the Talks and Screenings at the Folger, was held in the The Haskell Center for Education and Public Programs on Tuesday, December 1, 2015 at 6:30pm.

Heather Wolfe, Archivist and Curator of Manuscripts for the Folger Shakespeare Library, provided a behind-the-scenes preview of the exhibition Shakespeare, Life of an Icon, on view from January 20-March 27, 2016.

Dr. Heather Wolfe has curated numerous Folger exhibitions and has written widely on early modern manuscripts and the intersections between print and manuscript. She has edited The Trevelyon Miscellany of 1608 (2007), The Literary Career and Legacy of Elizabeth Cary (2007), and Letterwriting in Renaissance England (2004), an exhibition catalog co-written with Alan Stewart. She is principal investigator for EMMO (Early Modern Manuscripts Online), a project to create a free and searchable database of images and transcriptions of early modern manuscripts created in England or written in English, and curator of the online exhibition, Shakespeare Documented, a repository of images, descriptions, and transcriptions of documents and printed texts that refer or allude to Shakespeare, Shakespeare’s works, and Shakespeare’s family in their lifetimes.