A character list (also known as a dramatis personae) is a paratext that names most or all of the characters in a play. Many early modern playbooks included printed character lists, but some surviving texts include manuscript lists or printed lists that have been annotated.

Shakespeare, William. The Merry Wives of Windsor. First Folio. 1623. Call number STC 22273 Fo.1 no.57. A partial character list with descriptions written on the final page of the play. See this blog post by Marissa Nicosia and Emma Depledge for more information, digital images, and a transcription.

Daniel, Samuel. The Queenes arcadia. At London: Printed by G[eorge]. Eld, for Simon Waterson, 1606. Call #: G.3970.18. From the Bridgewater House Library. A printed character list with a single, early manuscript correction on the title page verso.

Hemings, William. The fatal contract, a French tragedy. Printed at London: For J.M., in the year, 1653. Call #: G.3972.10. A printed character list with the names of actors in the King’s Company written in the margins in a contemporary hand on pi2 verso.

Heywood, Thomas. A pleasant conceited comedy, wherein is shewed, how a man may choose a good wife from a bad. London: Printed [by Thomas Purfoot] for Matthew Lawe, 1621. Call #: G.3970.2. Frances Wolfreston copy, with her inscriptions. Manuscript character list on the title page verso in what appears to be a later hand.

Shakespeare, William. A wittie and pleasant comedy called the taming of the shrew. London: Printed by W[illiam]. S[tansby]. for Iohn Smethwicke, and are to be sold at his shop in Saint Dunstones Churchyard vnder the Diall, 1631. Call #: G.176.39. An early manuscript list of character on the title page verso, trimmed partially away but still legible.

Shakespeare, William. The tragedie of King Richard the Second. At London: Printed for Mathew Law, 1615. Call #: G. 176.33. An early manuscript list of characters on the title page verso, trimmed heavily and washed away.

Shirley, James. The Example. London: Printed by John Norton, for Andrew Crooke and William Cooke, 1637. Call #: G.3976.48. A reference to Langbaine on the title page, with a MS character list in the same hand on the title page verso.

Wilkins, George. The miseries of enforst mariage. London: Printed [by William White] for George Vincent, and are to be sold at his Shoppe in Woodstreete, 1611. Call #: G.3810.3. Early/contemporary MS character list captioned, "Persons rep[re]sented." Dampstained and difficult to read. Illegible inscription in same hand on title page recto. 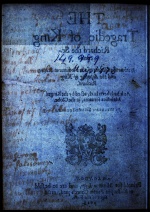 W, J., Gent. The Valiant Scot. London: Printed by Thomas Harper for Iohn Waterson, and to be sold at his shop in Pauls Church-yard, at the signe of the Crown, 1637. Call #: 822.4 V172. Formerly owned by Genest. Title page verso includes list of characters sorted into "Scots" and "English."

The Harry Ransom Center, University of Texas at Austin

Shakespeare, William. Julius Caesar. London : printed by H. H[ills]. Jun. for Hen. Herringman, and R. Bentley in Russel-street in Covent-Garden, and sold by Joseph Knight and Francis Saunders at the Blew-Anchor in the Lower Walk of the New-Exchange in the Strand, [1695?]. Call Number: SR - 50.15/ Accession Number: 81088310