The O.B. Hardison Poetry Series, co-sponsored with the PEN/Faulkner Foundation, presented Chapter and Verse: Julianna Baggott and Laura Kasischke on November 23, 2015, at 7:30pm in the Folger's Elizabethan Theatre.

The poet/novelists were introduced and had a conversation moderated by writer and poet Richard Peabody. 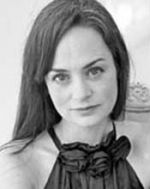 Julianna Baggott, a poet and novelist, writes under the pen names Bridget Asher and N.E. Bode. She has three volumes of poetry – This Country of Mothers, Compulsions of Silkworms and Bees, and Lizzie Borden in Love – and over 20 novels, including her recent Harriet Wolf’s Seventh Book of Wonders and All of Us & Everything. Her novel Pure, a New York Times Notable Book of the Year, is in movie development. 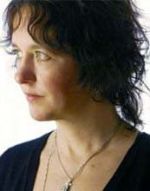 Laura Kasischke is the recipient of the 2012 National Book Critics Circle Award for Poetry. She has published nine books of poetry -- including Space, in Chains and The Infinitesimals -- and nine novels, three of which have been made into feature films – The Life Before Her Eyes, Suspicious River, and White Bird in a Blizzard.

From 1. Poetry Addresses Her Sister, the Novel

As children we were called,

more often than not,

by the other’s name.

But then you developed a swagger, busty with hips.

Don’t grow inward so: Be more like your sister.”

But I would think even she would admit

you go on too much.

You need to learn to whittle soap

to a narrow bone, to live in steam

so the wool shrinks to a toughened swatch,

not a sweater, not a mitten, something otherworldly.

From Compulsions of Silkworms & Bees © 2007 by Julianna Baggott, published by Pleiades Press. Used with permission.