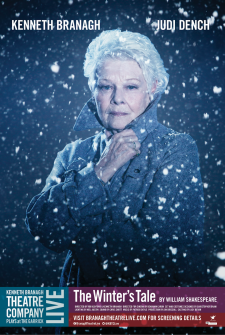 On Monday, February 16, 2016 as part of the Talks and Screenings at the Folger, the Folger hosted a screening of Branagh Theatre Live: The Winter's Tale, a live cinema broadcast from the stage of the Garrick Theatre in London. Due to its popularity, an encore screening was presented on Monday, February 29, 2016.