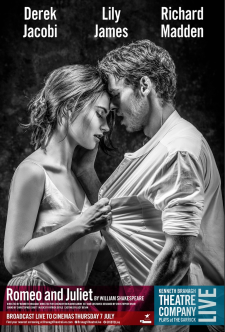 On Monday, October 3, 2016 as part of the Talks and Screenings at the Folger, the Folger hosted a screening of Branagh Theatre Live: Romeo and Juliet, a live cinema broadcast from the stage of the Garrick Theatre in London.

Kenneth Branagh co-directed the production with Rob Ashford, reuniting with the stars of his celebrated film of Cinderella, Richard Madden and Lily James, as Romeo and Juliet. Also featured were Sir Derek Jacobi as Mercutio and Meera Syal as The Nurse.