This article collects the children's exhibition material featured in Now Thrive the Armorers: Arms and Armor in Shakespeare, one of the Exhibitions at the Folger. 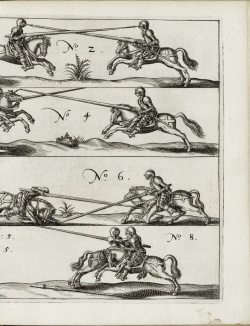 During William Shakespeare's lifetime (1564-1616), the way that wars were fought and the kinds of weapons that were used was changing very quickly.

Some of the new weapons included guns and cannons. Military officers started to study books to learn how to train their troops, use the new weapons, and keep up with important developments in technology.

What do you see in this picture?

Becoming a knight was hard work! Boys generally started training when they were seven and continued until they were in their 20s.

What sorts of training do you think they did?

A knight had to be strong, and also able to move quickly in battle. To stay in shape, knights practiced wrestling, running, and events like the shotput and javelin. These activities helped them build up strength and endurance. Knights also had to be expert riders. Knowing how to stay on a horse while fighting was one of a knight's most important skills.

Write your own training schedule and include the time for the following exercises. What else would you add?

Boys trained with practice weapons and even wore armor made for children, although not in battle. Instead, boys wore their armor on ceremonial occassions. Armor was an important part of life for knights-in-training because it helped show off how important their family was. A family that could afford to have armor made for their sons must be rich and powerful!

It could take up to three months for a workshop to produce just one suit of armor. Sometimes, for very fancy armor, it took even longer! Armor was also very expensive, costing about the same as one whole year's salary for a craftsman.

Listen to curator Jeffrey Forgeng talk about a gauntlet, or metal glove, made for a boy.

By Shakespeare’s day, the medieval craft of armor-making had become a modern industry. Governments engaged contractors who promised to deliver the equipment, and the contractors tapped a network of smaller suppliers to make up the thousands of orders it took to supply an army. The iron came from continual-production blast furnaces that melted iron ore to extract the metal. The iron was hammered into flat sheets by water-powered triphammers, manned by low-paid laborers. At the end of the process, the armor was finished with water-powered grinding and polishing wheels.

Despite these advances, the central stage of armor production remained very much a craft. The armorer trained for about seven years as an apprentice, learning the subtle art of shaping steel to accommodate the complex shapes and motions of the human body. The final product had to be strong enough to resist battlefield damage, flexible enough to allow almost total freedom of movement, and stylish enough to meet the tastes of fashion-conscious Elizabethans.

Listen to curator Jeffrey Forgeng talk about an extremely fancy suit of armor.