The O.B. Hardison Poetry Series, co-sponsored with The Waywiser Press, presented the Anthony Hecht Poetry Prize in the Folger's Elizabethan Theatre on November 17, 2014 at 7:30 pm. Geoffrey Brock, the 2013 Anthony Hecht Poetry Prize winner, read with prize judge, Heather McHugh. Pairing Brock’s bold new voice with McHugh’s acclaimed poetic perspective, the reading brought together two great writers with the intent to, in McHugh’s own words, “follow every surge of language, every scrap and flotsam.”

The Anthony Hecht Poetry Prize, created in honor of the Pulitzer Prize-winning poet, is awarded annually by The Waywiser Press for a poetry collection by a poet who has published no more than one book. It includes publication, and a $3,000 prize. 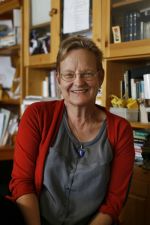 Heather McHugh's poetry collections include Upgraded to Serious (2009); Eyeshot (2004), shortlisted for the Pulitzer Prize; The Father of Predicaments (2001); and Hinge and Sign: Poems 1968-1993 (1994), which was selected as a National Book Award Finalist and named a “Notable Book of the Year” by the New York Times. In addition to her acclaimed poetry collections, McHugh has published a book of essays on poetry, Broken English: Poetry and Partiality (1993) and translations of Euripides, Paul Celan, Blaga Dimitrova, and Jean Follain.

Floodlights have come on behind and above

Where I sit in my public chair.

The lawn that had gradually darkened has brightened.

I’m far from a family I miss.

Is worse, I recall, than this.

Loneliness is a genuine poverty.

But forgot his wallet on the nightstand

When he left for work in a rush,

And now must go without food and coffee

For a few hours more than he’d wish.

That’s all. He still has a wallet. It’s bulging.

Money for love: a terrible simile,

A couple of blocks from Madison Avenue

Where commodities are dear,

Where all around me, rich skyscrapers

Having sent on their way the spent commuters

Who stream, uncertain, by,

And as for this whole splurge of a city,

Isn’t money at its heart?

What I meant to say at the start

Is that I noticed a woman reading

In a chair not far from mine.

Silver-haired, calm, she stirred a hunger

Hard for me to define,

Perhaps because she doesn’t seem lonely.

And what I loved was this:

The way, when dusk had darkened her pages,

As if expecting a kiss,

She closed her eyes and threw her head back,

Book open on her lap.

Perhaps she was thinking about her story,

I thought she’d leave me then for pastimes

More suited to the dark.

With the rhythms of Bryant Park,

For that’s when the floodlights came on, slowly,

Somewhere far above my need,

And the grass grew green again, and the woman

Reopened her eyes to read.

From Voices Bright Flags copyright 2014 by Geoffrey Brock, published by The Waywiser Press. Used with permission.