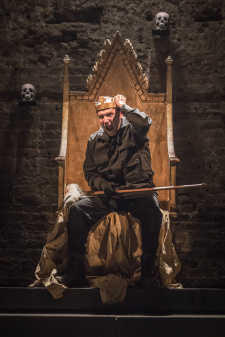 On Monday, August 29, 2016 as part of the Talks and Screenings at the Folger, the Folger hosted a screening of Almedia Theatre Live: Richard III, a live cinema broadcast from the stage of the Almedia Theatre in London.

The Almeida Theatre made its live screening debut with an explosive new adaptation of Shakespeare's Richard III, directed by Almeida Artistic Director Rupert Goold with Ralph Fiennes as Shakespeare’s most notorious villain and Vanessa Redgrave as Queen Margaret.

War-torn England is reeling after years of bitter conflict. King Edward is ailing, and as political unrest begins to stir once more, Edward’s brother Richard – vicious in war, despised in peacetime – awaits the opportunity to seize his brother’s crown.

To learn more about the production, visit the Almedia archives here.

The Almeida exists to launch the next generation of British artists onto the world stage.

A small room with an international reputation, the Almeida began life as a literary and scientific society – complete with library, lecture theatre and laboratory. From the beginning, our building existed to investigate the world. Today, they make brave new work that asks big questions: of plays, of theatre and of the world around us.

They bring together the most exciting artists to take risks; to provoke, inspire and surprise our audiences; to interrogate the present, dig up the past and imagine the future. Whether new work or reinvigorated classic, whether in our theatre, on the road or online, we make live art to excite, enliven and entertain.

The Almeida makes argument for theatre as an essential force in an increasingly fragmented society. Learn more about the Almedia here.