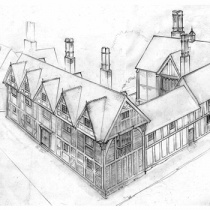 "Dig for Shakespeare: New Place Revealed, one of the Talks and Screenings at the Folger, was held in the Elizabethan Theatre on Monday, February 22, 2016 at 7:30 pm.

Only recently, the site of Shakespeare’s family home in Stratford upon Avon was uncovered by a seven -year archaeological investigation. This talk illuminated the fascinating discoveries that had been made, what they tell us about Shakespeare’s life in Stratford and how the Shakespeare Birthplace Trust is re-presenting New Place for today’s generation to enjoy.

At this event, Dr. Diana Owen, Director of the Shakespeare Birthplace Trust and Dr. Kevin Colls, Archaeological Project Manager, University of Staffordshire presented a special lecture on their findings at Shakespeare's home.

Presented in conjunction with the Folger exhibition Shakespeare, Life of an Icon.