The image known as "Immortality of Garrick" or "Apotheosis of Garrick" by George Carter memorializes the actor David Garrick (1717-1779). In the image, many of the actor's friends and colleagues mourn him, dressed as the Shakespeare characters they enjoyed playing. This article shows the painting and its subsequent engraving, alongside a transcription of a manuscript key to the actors and actresses, held by the Folger Shakespeare Library. For more information about David Garrick's life and art, read the Folgerpedia article David Garrick, 1717–1779: A Theatrical Life, one of the previous Exhibitions at the Folger. 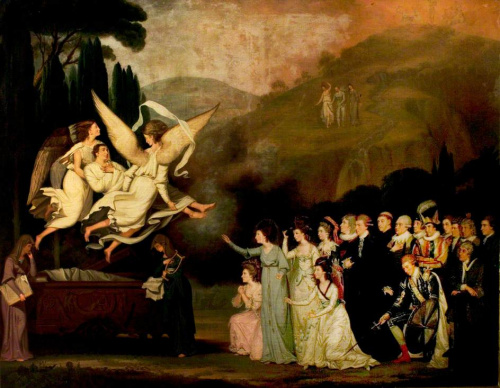 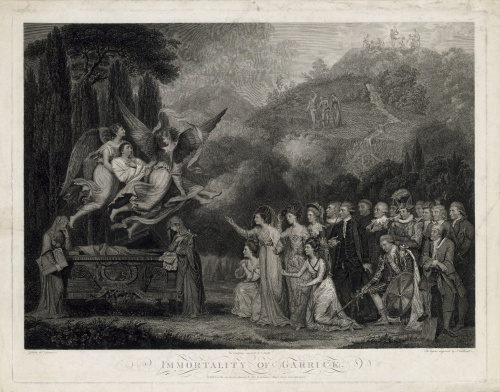 Transcription of the Key

A Key to the Print of "Immortality of Garrick”

They are all in their favorite Characters of Shakespeare.

The Apotheosis of Garrick

A sarcophagus, supported by Lyric Poetry and the Belles Lettres, in the Center is a Basso Relievo of Nature deploring the loss of her Son; she is weeping over a Medallion of Garrick; attending are two Loves, one with a Bow unstrung, the other extinguishing the Hymenical Torch; beneath, are Emblems of her Art, and this Motto--”He never shall return” with a group of seventeen of his Friends who had figured it upon the great Theatre of Life with him, and are come in their favorite Habits of Shakespeare, to pay their Funeral Obsequies to his Shrine; while aereails [angels] triumph over Death, by soaring with the Body to Parnassus; Thalia; Melpomne, and Shakespeare advance with Wreaths to receive him, to conduct him to the Summit of the Mount, and to the Presence of Apollo and the Muses.