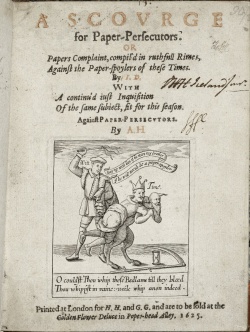 The title page of A scourge for paper-persecutors, 1625. Folger Digital Image 16468.

Yesterday's News: Seventeenth-Century English Broadsides and Newsbooks, part of the Exhibitions at the Folger, opened on March 29, 1995, and closed on March 14, 1996. A companion catalog was published in conjunction with the exhibition.

During the seventeenth century, England experienced an explosion of information as domestic news, in the form of printed pamphlets and broadsides, became more accessible to the general public. The political, social, and religious upheaval that marked the century created a demand for information that the London printing houses worked hard to satisfy.

Yesterday's News tells the story of the ways news traveled across cities and continents in the seventeenth century and what kind of news held readers' attention. Murders and other crimes were among the most popular subjects for newsbooks, and reports of wives killing husbands, mothers murdering children, and children doing away with parents and siblings abound. Weather seems to merit the most media attention when it is experienced in its extremes. A number of pamphlets, including The Wonders of this Windie Winter, were generated by an unusually stormy season in 1612-13 which exacted a heavy toll on life and livestock.

It is probably not surprising that the political unrest during the Civil Wars that permitted and even encouraged the printing of news as a profit-making enterprise also fostered the growth of a distrust of news entrepreneurs. Early reporters were not above embellishing the facts to make their product more appealing. One critic of the early press, John Davies, laments the decline of "serious" literature and the rise of more popular forms of writing, such as news in his satirical verse, A Scourge for Paper-Persecutors.

Chronicling everything from politics to weather, touching on the mundane and the macabre, the more than one hundred ballads, broadsides, and newsbooks that made up Yesterday's News offered an amusing and dramatic glimpse into the headline-making events of their day.