Difference between revisions of "The Technical Manual"

Elizabeth Walsh, head of reader services, and Rosalind Larry, head of circulation, curated The Technical Manual for The Curatorial Eye: Discoveries from the Folger Vault, part of the Exhibitions at the Folger. 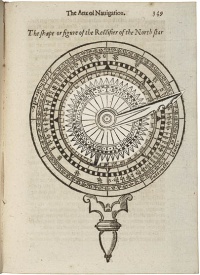 Thomas Blundeville. M. Blundevile his exercises, containing eight treatises, the titles whereof are set downe in the next printed page: which treatises are verie necessarie to be read and learned of all young gentlemen, that have not beene exercised in such disciplines: and yet are desirous to have knowledge as well in cosmographie, astronomie, and geographie, as also in the arte of navigation, in which arte it is impossible to profite without the helpe of these, or such like instructions. London, 1606. Shelfmark STC 3148 Copy 1.

In his Exercises, Thomas Blundeville compiled essays on practical subjects such as mathematics, cosmology, astronomy, geography, and navigation. These exercises were specifically written for young gentlemen, especially men who were about to go off to sea. Featured to the left is a volvelle, a rotating paper or cardboard disk, which he calls a “Rectificatorium Stellae Polaris” or the “Rectifier of the North Starre,” a mechanism for pinpointing the North star.

These techinical manuals were handy for tradesmen, but also had an aspect of entertainment to them. During times of relative peace, gunner and mathematician John Babington redirected his military skill towards the design and implementation of elaborate fireworks displays, a very popular form of civic entertainment. His manual provides instruction for the manufacture of powder, the structure and placement of explosive devices, and the mathematical formulae needed to ensure the proper trajectory of the pyrotechnics, which are used to illuminate an epic struggle between a horseman and a fire-breathing dragon, shown through the linked call number STC 1099 copy 1.

Listen to head of circulation Rosalind Larry discuss the use and function of a Thomas Blundeville's volvelle, "Good on Paper," by clicking the linked heading.