Difference between revisions of "The Rape of Lucrece"

The second of William Shakespeare's poems written as a minor epic, the long poem The Rape of Lucrece takes place as Rome becomes a republic. As a minor epic (a popular genre in Shakespeare's time), it centers on figures of seemingly secondary importance: Sextus Tarquinius, the king's son, and Lucrece, the wife of his friend.

The poem focuses initially on Tarquin's desire for Lucrece, whom he rapes. Afterward, he reels bitter disappointment. Shakespeare then drives him from the poem, which shifts to Lucrece and her sense of sexual shame.

Shakespeare found these incidents in Roman history and myth, as well as Chaucer and contemporary English writers, but he incorporated another genre, the complaint, to supply interior monologues for both characters. Taquin's complaint presents him as divided against himself, lusting for Lucrece but aware that raping her would, as he sees it, betray his friend and shame Tarquin and his family.

In her complaint, Lucrece struggles with the shame she feels, ultimately choosing suicide. Few acts have proved as controversial. In Roman culture, suicide could be a hero's death, but Christianity has not agreed. Lucrece's view is that, despite the chastity of her mind, she has been rendered unchaste—that mind and body, in her reading, cannot be separated.[1] 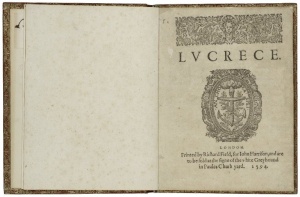 The Rape of Lucrece can be read online with Folger Digital Texts and can be purchased from Simon and Schuster in Shakespeare's Sonnets & Poems.

The Folger owns at least three stand-alone translations of The Rape of Lucrece in various languages (not including collected works). Cataloging of these works is ongoing as of early 2015, and many have full-level catalog records, but some works still have only partial records. Translations can be found Hamnet in by searching for "Translations"in the Genre/Form Term field, or by searching the Call Number (Left-Anchored) field for call numbers starting with PR2796 (see the list of Sh.Col. translations call numbers for specific language call numbers). Since not all translations are fully cataloged, some items may only turn up in one of these searches.