The Phoenix and the Turtle

In the classical tradition, the mythical phoenix consumes itself in fire, from the ashes of which another phoenix is born. In Shakespeare's poem, the phoenix is female and the turtle (that is, a turtledove) is male.

The poem has been interpreted in many ways. The phoenix and tutledove may die in a fire that produces a new phoenix—or may not produce offspring. Some see the poem as a celebration of their physical union. Others suggest that the two become one as they approach a Christian heaven, or offer a philosophical reading. Some even link them to historical figures, although such interpretations are no longer widely favored.

In the poem's first part, sometimes called the "session," birds assemble to sing the second part, or "anthem." The anthem celebrates the phoenix and turtle's love and introduces the figure of Reason. Reason composes the final "Threnos" (a dirge), which many find the most beautiful section.[1] 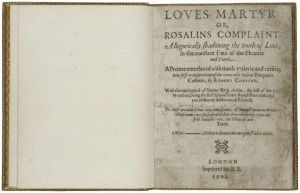 The Phoenix and the Turtle can be read online with Folger Digital Texts and can be purchased from Simon and Schuster in Shakespeare's Sonnets & Poems.

Explore the curated image group for The Phoenix and the Turtle in the Folger digital image collection.