Difference between revisions of "The Juvenile Theater: a Microcosm of Theater"

Art cataloger Bettina Smith curated The Juvenile Theater: a Microcosm of Theater for The Curatorial Eye: Discoveries from the Folger Vault, part of the Exhibitions at the Folger. 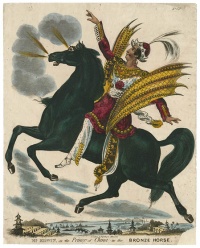 Click here to listen to art cataloger Bettina Smith discuss colored and uncolored theatrical portraits, as well as here for an example of a lavishly embellished tinsel print.