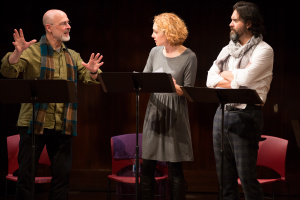 A free staged reading of The Book of Will by Lauren Gunderson, one of the Talks and Screenings at the Folger, was held in the Elizabethan Theatre on Wednesday, January 11, 2017 at 7:00pm.

Lauren Gunderson, one of America's most produced living playwrights, weaves a hilarious and heartfelt tale inspired by the true story of Shakespeare’s First Folio and how it came to be. After his death, Shakespeare’s friends Henry Condell and John Heminges join forces to preserve the plays he left behind – but not without hi-jinks and setbacks along the way. Follow the two actors and their cohorts as they embark on the mission that saved Shakespeare’s words.

The Book of Will was developed at the Colorado New Play Summit, and commissioned by the Denver Center for the Performing Arts.