Small Latin and less Greek: A #WhanThatAprilleDay pop-up exhibition at the Folger took place on April 2, 2019, from 1-4 pm. It was curated by Sara Schliep, the third Nadia Sophie Seiler Rare Materials Resident at the Folger. The exhibit was curated to celebrate the fifth annual #WhanThatAprilleDay; a Twitter holiday begun by Chaucer Doth Tweet (@LeVostreGC) to celebrate “oold, middel, ancient, and archaique” languages and remind “folk of the beautye and grete lovelinesse of studying the wordes of the past”. 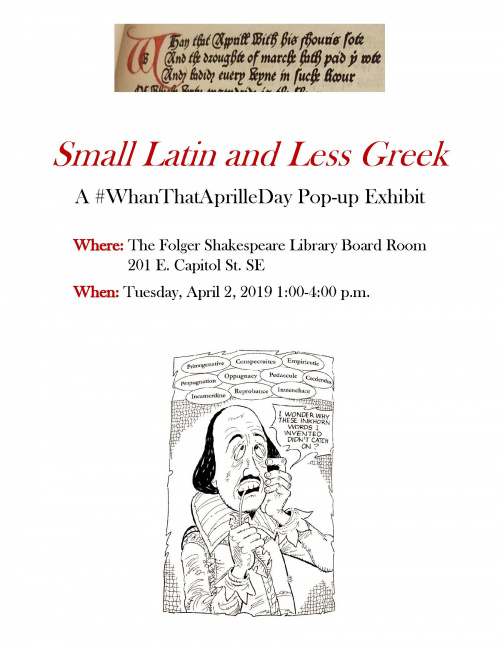 The fifteenth and sixteenth centuries saw an influx of between 10,000 and 25,000 words enter the English language.[1] These words—especially Latin and Greek legal, technical, and medical terms—were directly borrowed from foreign languages, or were newly coined (invented) by writers. Long words used or coined by scholarly writers soon became known as “inkhorn terms” or “inkhornisms.”[2] They were viewed by many with scorn, taking on connotations of learned pedantry, and sparked what became known as the Inkhorn Controversy. (The term derives from the early ink containers made of animal horn and the notion that these lengthy words used up more ink than their shorter, Saxon-rooted English counterparts; compare the Latin conflagration and the English fire.)

Within the Inkhorn Controversy, there were those who supported borrowings and coinages. These Neologizers believed this would enrich the English language, which during the Tudor period was considered ‘rude’ and ‘barbarous,’ lacking the appropriate words to express learned ideas.[3] On the other side of the Controversy were the Purists who disparaged the abuse and excess to which many of the Neologizers had gone. Some Purists even went so far as to condemn foreign borrowings and invent compounds from Saxon words. Their reasoning was that since English words consisted of a single syllable, several could be joined together and would be relatively self-evident in meaning as opposed to foreign, polysyllabic inkhorn terms. This notion of a "pure" English language was also advanced by the Archaizers (a subset of the Purists), who believed that using archaic words in literature carried the weight of antiquity and authority with them.

Small Latin and Less Greek brought together many of the writers and texts involved in the Inkhorn Controversy, illustrating not only the various early modern opinions about the English language but also showcasing some of the inkiest words penned in early modern England.

The exhibition catalog, the flyer, and inkhorn word search are available for download as PDFs.

3) Thomas Wilson. The arte of rhetorique: for the vse of all suche as are studious of eloquence, sette forth in English, by Thomas Wilson. [[London]: Richardus Graftonus, typographus regius excudebat], Anno Domini. M. D. LIII. [1553] Mense Ianuarij. Folger STC 25799.

4) Ralph Lever. The arte of reason, rightly termed, witcraft: teaching a perfect way to argue and dispute. Made by Raphe Leuer. Imprinted at London: By H. Bynneman, dwelling in Knightrider streate, at the signe of the Mermayde. Anno. 1573. Folger STC 15541.

5) Edmund Spenser. The shepheardes calender: conteining twelue aeglogues proportionable to the twelue monethes. Imprinted at London: By Iohn Wolfe for Iohn Harrison the yonger, dwelling in Pater noster Roe, at the signe of the Anker, 1586. Folger STC 23901.

7) George Puttenham. The arte of English poesie. Contriued into three bookes: the first of poets and poesie, the second of proportion, the third of ornament. At London: Printed by Richard Field, dwelling in the black-Friers, neere Ludgate, 1589. Folger STC 20519 copy 1. Selected images available in the Folger Digital Image Collection.

10) Thomas Speght. The vvorkes of our ancient and learned English poet, Geffrey Chaucer, newly printed. To that which was done in the former impression, thus much is now added. London: Printed by Adam Islip, an. Dom. 1602. Folger STC 5080 copy 3 (flat).

The First Dictionaries: Standardization and Rivalries

11) Henry Cockeram. The English dictionarie: or, An interpreter of hard English vvords. Enabling as well ladies and gentlewomen, young schollers, clarkes, merchants, as also strangers of any nation, to the vnderstanding of the more difficult authors already printed in our language, and the more speedy attaining of an elegant perfection of the English tongue, both in reading, speaking and writing. Being a collection of the choisest words contained in the Table alphabeticall and English expositor, and of some thousands of words neuer published by any heretofore. By H.C. Gent. London: Printed [by Eliot’s Court Press] for Edmund Weauer, and are to be sold at his shop at the great north gate of Pauls Church, 1623. Folger STC 5461.2.

12) Thomas Blount. Glossographia: or A dictionary, interpreting all such hard vvords, whether Hebrew, Greek, Latin, Italian, Spanish, French, Teutonick, Belgick, British or Saxon; as are now used in our refined English tongue. ... With etymologies, definitions, and historical observations on the same. Very useful for all such as desire to understand what they read. By T.B. of the Inner-Temple, Barrester. London: Printed by Tho. Newcomb, and are to be sold by Humphrey Moseley, at the Prince’s Arms in St Pauls Church-yard, and George Sawbridge at the Bible in Ludgate-hil, 1656. Folger B3334.

13) Edward Phillips. The nevv vvorld of vvords. Or a general English dictionary. Containing the proper significations, and etymologies of all words derived from other languages, viz. Hebrew, Arabick, Syriack, Greek, Latin, Italian, French, Spanish, Brittish, Dutch, Saxon, &c. ... The fourth edition. ... Containing besides ... a collection of such affected or barbarous words as are advis’d to be cautiously or not at all us’d. ... Collected and published by E.P. London: Printed by W.R. for Obadiah Blagrave at the Bear in St. Pauls Church-yard, near the little North door, 1678. Folger P2072.

Beyond the Inkhorn Controversy