This article reproduces an excerpt of Descriptive Cataloging of Rare Materials (Books) (usually referred to as DCRM(B)) concerning signature statements in catalog records, along with (eventually) notes and observations on Folger practice.

7B9.1. General rule. Make a note giving details of the signatures of a volume, if considered important. Give these signature details according to the formula in Philip Gaskell's A New Introduction to Bibliography (see p. 328-332), insofar as typographical facilities permit. Preface this note with the word “Signatures” and a colon. 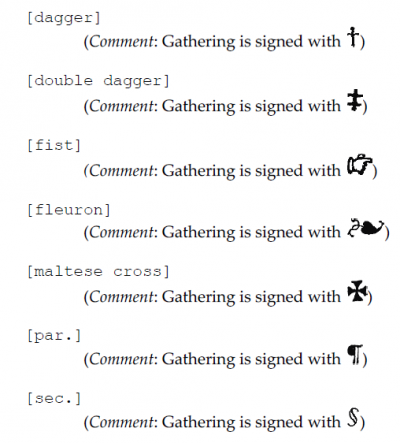 7B9.4. Non-conventional Latin alphabet. If the gatherings are signed with roman letters according to a pattern other than the conventional 23-letter Latin alphabet (i.e., A-Z, less I or J, U or V, and W), make this explicit by recording the additional letters in the signature statement.