Manuscript catalogers Kathleen Burlingame, Stephanie Fell, and Nadia Seiler curated Shakespeare in Translation for The Curatorial Eye: Discoveries from the Folger Vault, part of the Exhibitions at the Folger.

Shakespeare’s international acclaim is due, at least in part, to his skillful use of the English language; yet many people around the globe have become familiar with his plays and poems through translation and performance in a great number of other languages, from Latin to Urdu. The manuscripts in this case, ranging in date from the early nineteenth century to the mid-twentieth century, illustrate Shakespeare’s reach and popularity beyond the English-speaking public, as exemplified by a Romanian schoolgirl’s notebook, a Danish cast list, a letter from a German king, a letter in praise of a German-American actress, and an unpublished satire by a French caricaturist. 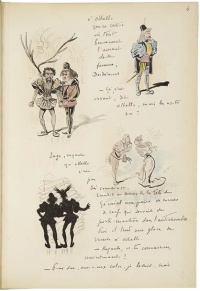 The image to the left is from an apparently unpublished volume of travesties by the French caricaturist Henriot and contains humorous text and illustrations depicting theatrical performances in Paris during the 1894–95 season. Among the productions represented is the first French production of Giuseppe Verdi’s Shakespearian opera, Otello.

In a letter, J. Guido Methua praises the versatility of his wife, German-American actress Marie Methua-Scheller. He refers to her “tremendous triumph as Desdemona” in Edwin Booth’s production of Othello, in which she spoke her lines in German to Othello and in English to Iago and the company. Inspired by the success of this production, Booth produced several more polyglot Shakespeare productions in which he appeared opposite stars from the German and Italian stage.

Non-English stage productions of Shakespeare were popular, and the Folger owns a cast list for a Danish production of Hamlet which contains many revisions. Two men listed for the title role are of particular interest. Peter Foersom translated Hamlet and was the first Dane to perform the title role in 1813. Nicolai Peter Nielsen was part of a group of soldiers responsible for the first production of Hamlet to be staged at Kronborg (the castle immortalized as Elsinore). Nielsen later left the military for a career at the Kongelige Teater (The Royal Danish Theatre), where he took over the role of Hamlet in 1826.

The Folger collects more personal representations of Shakespeare in translation as well. This school notebook was created by a Romanian teenager for a course of instruction in world literature and can be viewed through the linked call number W.a.264. The works represented include eight plays by Shakespeare. Each entry features a skillfully rendered watercolor illustration of a scene or symbol from the particular work discussed. The notebook, which is marked with comments from her tutor in red pencil, was created during the height of Communist persecution in Romania.

Little is known about the young woman who kept this school notebook. Click the linked heading to hear manuscript cataloger Kathleen Burlingame explain the circumstances and political backdrop in which this manuscript was comped in "Imagining Romeo."