Shakespeare’s Westeros: Literary and Historical Inspirations for Game of Thrones

Shakespeare's Westeros: Literary and Historical Inspirations for Game of Thrones, a pop-up exhibition at the Folger, took place on May 23, 2019, from 11am to 2pm in the Founder's Room. It was curated by Kate Long, Visitor Education Programs Manager.

Author George R. R. Martin points to many sources that inspired plots and characters in his book series, A Song of Ice and Fire (adapted into the Game of Thrones television series on HBO). He pulled from history and literature, much of which is represented in the Folger collections. From Shakespeare’s plays to English monarchs, the stories told by these objects will start to sound awfully familiar.

The exhibition labels and the flyer are available for download as PDF files. 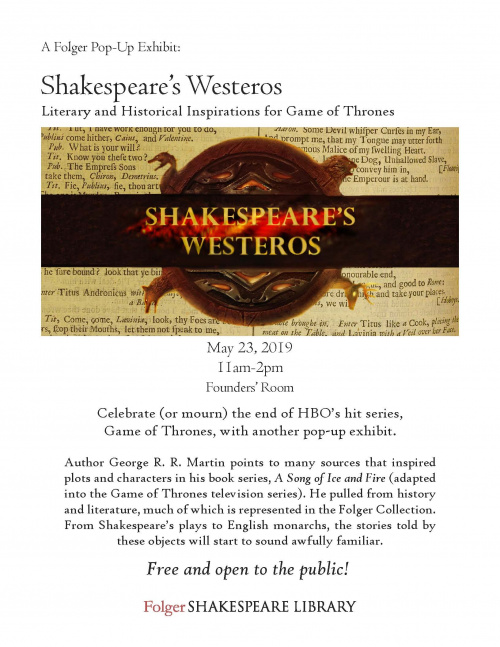 
Legend has it that St. George of England slayed a dragon to save a princess. While there are countless images representing this tale, this particular print is reminiscent of the death of Daenerys’ second dragon, Rhaegal. In Season 8, Episode 4, Euron Greyjoy uses a ship-mounted scorpion to shoot Rhaegal, taking him down with a final bolt through the neck.


One of the biggest influences of the A Song of Ice and Fire series cited by George R. R. Martin was the War of the Roses, a series of civil wars between the two rival branches of the Plantagenets for the English throne. The two houses, the Lancasters (Lannisters?) and the Yorks (Starks?) fought for decades (mostly between 1455 and 1487), fighting bloody battles and killing kings, until a marriage between Henry Tudor (later Henry VII), a Lancastrian, and Elizabeth of York. The union ended the war and started the Tudor reign. Lannister/Stark marriages, on the other hand, were not as successful…


Who could forget Lord Walder Frey’s last meal? A pie made out of his two sons, Black Walder, and Lothar cooked by Arya Stark. Over four hundred years earlier, Shakespeare wrote of Empress Tamora’s sons, Chiron and Demetrius, baked into a pie and served to her in his most gruesome play, Titus Andronicus. And just like GoT fans today, theatre-goers of Elizabethan England loved the drama and gore.


This is a prop sword used by one of the Kean’s (Charles or his son Edmund), both famous 19th century Shakespearean actors. Out of the Folger collection, it is the most similar to the broad swords used by the characters in Game of Thrones.


No, unfortunately this isn’t a real death mask made from Shakespeare’s own face. The craze of creating Shakespeare death masks peaked in the 19th century during a trend of Shakespeare worship, called Bardolatry. So why is it here? The mask echoes one of the faces that you might have found on the walls of the Temple of the Many-Faced God.

George R. R. Martin has cited the Glenco Massacre as one of the inspirations for the Red Wedding, where several of the Starks were murdered by the Freys despite having protection under “guest right”. The Massacre of Glencoe (February 13, 1692) refers to the slaughter of members of the MacDonald clan by Archibald Campbell, 10th earl of Argyll’s soldiers after the MacDonalds gave them room and board. The massacre left around 38 people dead. The soldiers were thought to have committed “slaughter under trust,” based on a 1587 law that forbade murder once a group had surrendered or accepted hospitality.


“…for the good & safety of the Country, that these miscreants be [cut] off root and branch.” – King James I’s Decree to the Campbells about the MacDonalds.


“We’ll rip her out, root and stem.” – Daenerys Targaryen about Cersei Lannister


Like in the early modern period, coats of arms are a major part of the identity of family houses in Game of Thrones. This manuscript contains coats of arms designs granted to different families. You can see small letters pointing to different parts of the sigil indicating colors, such as “A” for argent (silver). The page it is open to show a coat of arms that includes both a stag and a lion, bringing to mind the marriage of Robert Baratheon and Cersei Lannister [note: this page is not available digitally]. Almost all of the symbols of the major houses of Westeros are represented in this manuscript, including a tower (Frey), a falcon (Arryn), and a dragon (Targaryen).


As Game of Thrones is an adaptation of the A Song of Ice and Fire Series, many of Shakespeare’s plays could be called adaptations of stories in Holinshed’s Chronicles. Holinshed’s Chronicles is a mix of legend and history that covers the royal history of England, Scotland, and Ireland. It served as one of the main sources for many of Shakespeare’s plays: Macbeth, King Lear, Cymbeline, and the most of his histories.


9). George R. R. Martin
A Game of Thrones
United States: 1996
On loan from a private collection


It’s no secret that the Game of Thrones series not only deviated from the books, but went on to complete the story before the books were even finished. However, this is the source material. As Shakespeare did with Holinshed’s Chronicles and other established tales, the show writers, D.B. Weiss and David Benioff, took the material and made it their own (with input from George, of course).