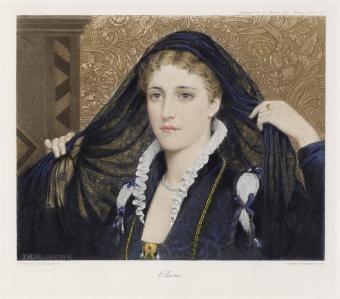 Shakespeare's Unruly Women, part of the Exhibitions at the Folger, opened on February 18, 1997, and closed on August 9, 1997. The exhibition was curated by Georgianna Ziegler, the Louis B. Thalheimer Associate Librarian and Head of Reference at the Folger Shakespeare Library.

"Unruly women," "outlaws," "the female Wild," "the Other": these are some of the provocative terms used by feminist scholars in recent years to refer to Shakespeare's heroines. They have helped us to take a fresh look at these characters while we are reevaluating the position of women within our own society. But are Shakespeare's women really unruly? It would be anachronistic to believe that he created rebellious feminists in an age that had never heard the term. Nevertheless, writing many of his plays with Elizabeth I on the throne, Shakespeare created heroines who operate in, rebel against, attempt to rule, or are crushed by a social structure largely determined by men.

This exhibition draws on the rich resources in the Folger Shakespeare Library, some of which were purchased by Henry Clay and Emily Jordan Folger during the late Victorian period when they began their collection. It includes materials from the late eighteenth and earl twentieth centuries but focuses primarily on the ways in which Shakespeare's heroines were appropriated into the moral, literary, and theatrical culture of the nineteenth century.

Every period sees something of its own interests in Shakespeare's plays and characters; the Victorians were no exception, nor are we today. It is gratifying to recognize that Shakespeare dramatized many faces of womanhood -- her "infinite variety"-- for his time and for every age since.

With another queen on the throne in nineteenth-century Britain, both women and Shakespeare were idealized. During Queen Victoria's reign (1837-1901), editions of Shakespeare were produced especially with the female reader or listener in mind. Any passage "that might wound a feminine sense of delicacy" was cut.

Books about Shakespeare's heroines, illustrated with their portraits, were used to disseminate ideas of good moral behavior among young women. Mary Cowden Clarke imagined stories about the heroines before they enter their plays in Girlhood of Shakespeare's Heroines. The book deals with subjects such as sexual assault and postpartem depression that were not readily discussed by mothers of the period. Just as many of the heroines reveal strong personalities in the plays, so many Victorian women were not "Angels in the house," as the poet Coventry Patmore called them. 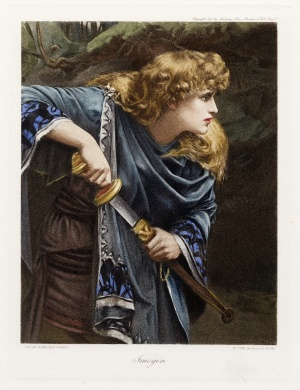 Picture the Victorian parlor, that crowded room, overflowing with horsehair sofas, a shawl-covered piano, perhaps a stuffed bird under glass, certainly a multitude of lace doilies and china brick-a-brack, dark engravings on the walls, and copies of the Bible, Shakespeare, a ladies' annual, and several picture books on the many tables.

Here the family gathered to read and sew in the evenings or to entertain friends. Lacking our modern enticements—television, computer games, and movies—the Victorians turned to reading aloud and looking at pictures for entertainment.

Shakespeare, the great national poet, provided inspiration for some of these. The Graphic Gallery of Shakespeare's Heroines is just one. The Graphic magazine, a popular London publication with a circulation in the hundreds of thousands, commissioned a series of twenty-one paintings of Shakespeare's heroines by some of the leading artists of the day, including both Laura Alma-Tadema, the only woman artist represented, and her husband Sir Lawrence.

The paintings were displayed in a London gallery around 1888 and reproduced as double page centerfolds purchased with the magazine. They were also sold in portfolio editions that could be viewed on a table or individually framed.

The Folger has sets of both the larger, black and white and smaller colored goupil gravures. A contemporary reviewer praised the set as "one of the most sumptuous and ... most artistic publications that we have lately seen."

Learn more about a few of Shakespeare's most famous and infamous female characters.

"All Shakespeare's women, being women, either love or have loved, or are capable of loving; but Juliet is love itself." Anna Jameson's remark in 1832 sets the tone for the nineteenth-century's view of Juliet as the young teenager, full of imagination and passion, given over to the thrill of her first love.

Raised in the wealthy Capulet household, by parents who left her care to the Nurse, Juliet leads a sheltered life until she meets Romeo. Then her determination to marry this man from a rival family leads her to resist her parents and strike out on her own. As M. Leigh Noel says of Juliet in 1885: "When a woman unites these two qualities—resolution and cunning—what is there she cannot effect?"

The American actresses, sisters Charlotte and Susan Cushman, premiered as Romeo and Juliet at the Haymarket Theatre, London in 1846. Their success is indicated by the fact that they played these parts over twenty times. Not all reviewers were complimentary, however. One reviewer satirized: "Miss Romeo,—or rather,—Miss Cushman as Romeo, has appeared this week at the Haymarket. The curiosity is not a novelty...Why should not Mr. Charles Kean play Juliet?"

Petulant Katherine and mild Bianca are about as unlike as any two sisters can be. While many of Shakespeare's heroines defy their fathers to marry the men of their choice, only Kate is stubborn, loud mouthed, and disinclined to marry at all. She is dragged kicking and screaming to the alter by Petruchio, and when she gives her final speach about of wife's duty to her husband, we wonder if she is really "tamed."

Nineteenth century writers saw in her behavior the lack of a mother's influence on her upbringing. The American, Henrietta Lee Palmer, wrote in 1855: "It is scarcely possible to consider the character of Katharina with gravity; her shrewishness is so wildly extravagant, so inconceivable in any maiden, 'young, beautious, and brought up as best becomes a gentlewoman,' that she may serve but as the heroine of the extravaganza wherein she figures."

Cleopatra was another problematic heroine for the Victorians who had to confront her blatant sensuality in an age that valued women's modesty. The image of Cleopatra changed drastically during the course of the nineteenth century. The early image by Kenny Meadows from 1839 shows her with arms seductively raised, but fully clothed and corseted like the proper Victorian woman.

By the end of the century, John W. Waterhouse creates a splendid Cleopatra, gazing out from under sultry eyebrows, as she lounges easily on a leopard skin. Uncorseted and bra-less, she is the dangerous, seductive, woman of the fin-de-siècle. Her figure looks forward to the New Woman, already agitating for university degrees, women's suffrage, and a place in the work force.

The French actress Sarah Bernhardt performed the role both in Shakespeare's Antony and Cleopatra and in an extravaganza of costume and scenery created for her by Sardou. Gold and Fizdale, in their recent biography of Bernhardt, recount an incident from the London production: "After watching Sarah as Cleopatra, lasciviously entwined in her lover's arms, an elderly dowager was heard to say: 'How unlike, how very unlike the home life of our own dear queen'." 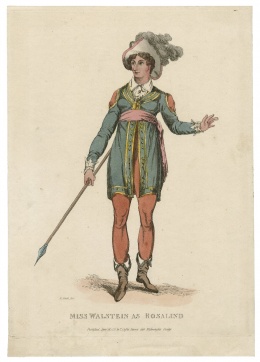 Rosalind has been a favorite role for actresses from Peg Woffington in the eighteenth century to Katherine Hepburn in our own. Audiences, especially in earlier centuries, enjoyed seeing women wear a man's doublet and hose, and actresses enjoyed Rosalind's liveliness and wit.

Rosalind, daughter and niece of dukes, disguises herself in boy's attire when she is banished from her uncle's court. Accompanied by her cousin, Celia, and the Fool, Touchstone, she travels to the Forest of Arden where she teaches her lover, Orlando, the art of wooing. There she is reunited with her banished father, and all ends "as you like it" with a triple wedding.

Two hand-colored inexpensive prints of Mrs. Johnston and Miss Walstein as Rosalind were made for a popular audience in the early nineteenth century.

Lady Macbeth, one of Shakespeare's most "unruly" women, was difficult for the proper Victorian age to assimilate. Generally, they took one of two stances towards her, either placing her in the distant past of the "barbarous" Middle Ages, or seeing her as a Victorian wife, whose ambitions were all for her husband but who was discarded by him after his success, fell into madness, and suffered a lonely death. This picture by the popular artist Kenny Meadows shows Lady Macbeth with the rosebud mouth and fine features of a Victorian young lady, only the frowning brows and clenched dagger indicating her firm purpose.