This article is about Shakespeare's play. For other uses, see Richard III (disambiguation).

In Richard III, one of William Shakespeare's plays, Shakespeare invites us on a moral holiday. The play draws us to identify with Richard and his fantasy of total control of self and domination of others. Not yet king at the start of the play, Richard presents himself as an enterprising villain as he successfully plans to dispose of his brother Clarence. Richard achieves similar success in conquering the woman he chooses to marry. He carves a way to the throne through assassination and executions.

But Richard also meets resistance, most threateningly from Queen Margaret, widow of King Henry VI, whom he killed before the play's beginning. Margaret issues a stream of curses, including one on Richard.

Gradually, the curses are fulfilled, suggesting the curse on Richard may come true, too. Increasingly, the play directs our sympathies away from Richard. His supporters desert him; his victims pile up. We may begin to share in the desire for vengeance voiced by Margaret.

Shakespeare is thought to have written Richard III in 1592-94. It was published as a quarto in 1597. A major source is Sir Thomas More's The History of King Richard III.[1] 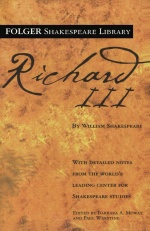 Richard III can be read online with Folger Digital Texts and purchased from Simon and Schuster.

The Folger owns over 25 stand-alone translations of Richard III in various languages (not including collected works). Cataloging of these works is ongoing as of early 2015, and many have full-level catalog records, but some works still have only partial records. Translations can be found Hamnet in by searching for "Translations"in the Genre/Form Term field, or by searching the Call Number (Left-Anchored) field for call numbers starting with PR2796 (see the list of Sh.Col. translations call numbers for specific language call numbers). Since not all translations are fully cataloged, some items may only turn up in one of these searches.