This article is about Shakespeare's play. For other uses, see Richard II (disambiguation).

Richard II, one of William Shakespeare's plays, presents a momentous struggle between Richard II and his cousin Henry Bolingbroke. Richard is the legitimate king; he succeeded his grandfather, King Edward III, after the earlier death of his father Edward, the Black Prince. Yet Richard is also seen by many as a tyrant. He toys with his subjects, exiling Bolingbroke for six years.

When he seizes the title and property that should be Bolingbroke's, Richard threatens the very structure of the kingdom. Bolingbroke returns with an army that is supported by nobles and commoners alike, both believing themselves oppressed by Richard. This sets the stage for a confrontation between his army and the tradition of sacred kingship supporting the isolated, but now more sympathetic, Richard.

Richard II was probably written in 1595, and may have been first performed that year. It was published as a quarto in 1597. Sources include Raphael Holinshed's Chronicles and Edward Hall's Union of the Two Noble and Illustre Families of Lancaster and York; Samuel Daniel's Civil Wars may be a source, too.[1] 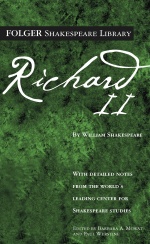 Richard II can be read online with Folger Digital Texts and purchased from Simon and Schuster.

The Folger owns at least 10 stand-alone translations of Richard II in various languages (not including collected works). Cataloging of these works is ongoing as of early 2015, and many have full-level catalog records, but some works still have only partial records. Translations can be found Hamnet in by searching for "Translations"in the Genre/Form Term field, or by searching the Call Number (Left-Anchored) field for call numbers starting with PR2796 (see the list of Sh.Col. translations call numbers for specific language call numbers). Since not all translations are fully cataloged, some items may only turn up in one of these searches.