Steven Galbraith, the Andrew W. Mellon curator of books, curated Reuniting Pamphlets, Restoring Provenance for The Curatorial Eye: Discoveries from the Folger Vault, part of the Exhibitions at the Folger.

For ease of cataloging, it was common practice in the mid-twentieth century for libraries to disbind collected volumes, discard the bindings and endpapers, and shelve each item individually. But this practice can permanently erase an item’s provenance. In the first centuries of printing, when printed books and pamphlets were usually sold unbound, book owners would often group small books together into one volume. When such volumes survive intact, they offer invaluable evidence concerning private book collections. Recognizing this, Letitia Yeandle, the Folger Library’s former curator of manuscripts, saved the bindings and endpapers of Folger pamphlets being removed from their bindings. Because early owners often wrote tables of contents on the endpapers of their collected volumes, it is sometimes possible to study Folger binding remnants and identify which books were once bound together. While these pamphlets will not be reunited physically, Galbraith is involved in an ongoing project to reunite them virtually through notes added to each book’s record in Hamnet, the Folger’s online catalog. 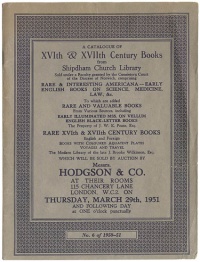 Once accessioned by the Folger, volume "1042," along with other collected volumes, was disbound in 1951-52 and housed in an archival box containing bindings, boards, endpapers, and other remnants. In an ongoing project, Folger staff continue to search these boxes (known at the "graveyard") for clues that may help reunite more books and pamphlets.

Click on the linked heading to hear curator of books Steven Galbraith talk about this ongoing project and the importance of restoring provenance to the pamphlets in this collection in "From the 'Graveyard.'"