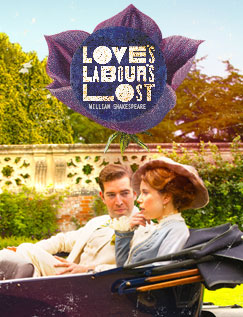 On Monday, March 30 2015 as part of the Talks and Screenings at the Folger, the Folger hosted a screening of RSC Live: Love's Labour's Lost, a live cinema broadcast from the stage of the Royal Shakespeare Company, captured from Shakespeare's hometown of Stratford-upon-Avon, in their own Elizabethan Theatre.

"Summer 1914: In order to dedicate themselves to a life of study, the King and his friends take an oath to avoid the company of women for three years. No sooner have they made their pledge than the Princess of France and her ladies-in-waiting arrive, presenting the men with a severe test of resolve." For more information, including video interviews, backstage photos and more, visit the RSC here.