Prospectuses are printed materials (ephemera) which advertise an upcoming work or product and, often, seek financial support for that work (either in the form of subscriptions or early reservations). The product advertised could be anything from a literary work to an insurance company.

Prospectuses at the Folger 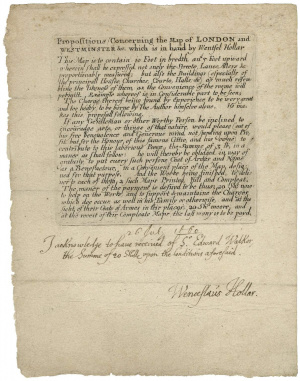 Unsurprisingly, most of the prospectuses in the Folger collection advertise books. They may be either standalone items, or they may be bound into a larger work.

The best way to find them in Hamnet is to search "prospectuses" in the Form/Genre search in the Advanced Search tab. (This will find items described as either "Prospectuses" or "Book prospectuses" in one search.) However, please note that many prospectuses, as with other forms of ephemera, do not yet have records in Hamnet, and may be recorded only in the card catalog.

An excellent example of a prospectus in the Folger collection is Propositions concerning the map of London and Westminster by Wenceslaus Hollar (X.d.454), which outlines Hollar's plan to execute a large-scale (10 x 5 ft.) bird's-eye view map of London. This particular prospectus also contains a manuscript receipt signed, for £20, from Hollar to Sir Edward Walker, July 26, 1660. Walker undertakes to pay £3 of this sum, as outlined above. The prospectus came with a Bird's-eye plan of the west central district of London he used to sell the idea to potential backers of the project (ART 264- 511 (size L)). Unfortunately, Hollar's project never came to fruition because of the change of London's landscape during the Great Fire of 1666, as well as his old age and death in 1677. 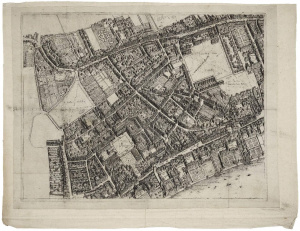 When cataloging prospectuses, generally follow Vault cataloging guidelines, with additions noted below. Make sure that the work you are cataloging is a prospectus (advertising a work not yet published), and not a publisher's or bookseller's advertisement (advertising work(s) recently published).

If the item you are cataloging turns out not to be a prospectus, but rather advertising material for an already-published work, catalog it according to standard rules for cataloging Vault material, and use the genre term "Publishers' advertisements" instead of "Prospectuses."