Senior cataloger Ron Bogdan curated Prohibiti: Censorship in Sixteenth-Century Italy for The Curatorial Eye: Discoveries from the Folger Vault, part of the Exhibitions at the Folger.

From the early decades of the sixteenth century, ecclesiastical authorities throughout the Catholic world compiled lists of books considered heretical. The Council of Trent (1545–1563), convened by the Catholic Church to condemn Protestantism, led to a new, systematic approach to the banning of books. The “Tridentine Index” of 1564 was the first Roman index that, in addition to listing banned books, also enumerated guiding rules for censorship. Although indexes of prohibited books continued to be compiled throughout Europe, it was the authorities in Rome and other Italian cities who worked most actively in censorship. While cataloging the book shown below, Bogdan discovered the manuscript notes bound with this printed book, which allow us to enter the world of a “working” sixteenth-century censor. Its pages are filled with references to condemned authors, copies of correspondence with other censors, and lists of passages to be expurgated (literally, “purged out”). 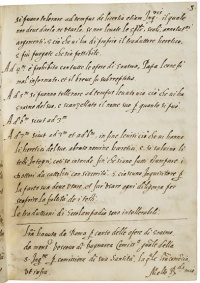 In fact, fifty pages of manuscript notes by an unknown censor are bound on either side of this work by Paolo Costabili. The printed Censura contains a long list of passages requiring deletion from a recently published edition of the legal text Decretum Gratiani, considered suspect because of the scholarly glosses of Protestant jurists. The manuscript pages surrounding the publication contain a curious collection of indulgences extended to inquisitors and censors, rules for censoring books, copies of correspondence with some of the most important ecclesiastical censors of the day, and lists of passages from books requiring censorship. The Folger owns copies of many of the books named in the manuscript, including the works of Erasmus, translations of Johann Oecolampadius, poems by Luigi Tansillo, and several of Petrarch's sonnets.

The works of Desiderius Erasmus, Dutch Renaissance humanist scholar and theologian, were listed in the early indexes of prohibited books that followed the Council of Trent. Nine fables translated into Latin by Erasmus were included in the Folger's copy of the fables of Aesop and others. The table of contents has Erasmus’s name blotted out and the corresponding section of text torn away. A passage mocking a church official has been crossed out, as have the words sacerdos (priest) and episcopus (bishop), all evidence of ecclesiastical censorship.

In the case of German Protestant theologian Johann Oecolampadius (1482–1531), it is not the original work of Saint Gregory of Neocaesarea that is problematic, but rather it is Oecolampadius's translation. He was considered a “heretical” scholar, and the notes of the Italian censor are explicit: “The translations of Oecolampadius are intolerable.”

A poem written in his youth by Luigi Tansillo, Le vendemmiatore, was deemed licentious and placed on Pope Paul IV’s Index of 1559, casting a shadow over the remainder of the poet’s literary career. The censor sums up the ecclesiastical position: “Le vendemmiatore of Tansillo is indecent and filthy.” The publisher of this 1574 Venetian edition of selections from the poem is understandably anonymous.

More widely known than Tansillo, the poet and humanist Petrarch also earned the disfavor of the Church with his so-called “Babylonian sonnets.” These sonnets, criticizing the greed and decadence of the papal court, were suppressed so that they could not in turn be used by Protestant propagandists. The censor writes: “The following four sonnets of Petrarch are prohibited, along with their annotations....” The fate of these sonnets throughout the printing history of the Canzoniere has been varied. At times omitted, at times included and subsequently mutilated, the edition on exhibit shows an interesting compromise. The spaces of the “offending” sonnets have been left blank except for their numbers—allowing them to be penned in by the owner.

In addition to theological and literary works, legal texts came under the intense scrutiny of censors. The Practica papiensis of the jurist Ferrari contained a collection of formulas used in civil, canonistic, and criminal procedures. Although it appeared in the index of 1554, it was not until 1572 that a censored version dedicated to Pope Pius V was published. Remaining “errors found in Practica papiensis” were corrected in an edition appearing in 1575.

Listen to senior cataloger Ron Bogdan discuss the details of this extraordinary piece of censorship by clicking the linked heading above.