Louis B. Thalheimer Head of Reference, Georgianna Ziegler, curated Personalizing Shakespeare for The Curatorial Eye: Discoveries from the Folger Vault, part of the Exhibitions at the Folger.

Next to the Bible, there have been few books as often personalized as copies of Shakespeare. They have been given as gifts of friendship and to mark weddings, graduations, or other great accomplishments. In them, owners have noted important events in their lives: birthdays, deaths, holidays, wartime service, etc. Ziegler offers a brief sampling of some of the more recognizable owners, including President Franklin Roosevelt, Queen Victoria, Walt Whitman, and the actors Edwin Booth and Ellen Terry. They represent hundreds of other names, of people known and unknown, who owned and personalized copies now in the Folger Library’s large collection of Shakespeare editions.

Known among collectors as "association copies," these sometimes average editions of books are made special by those who owned them and left their personal marks on the text. 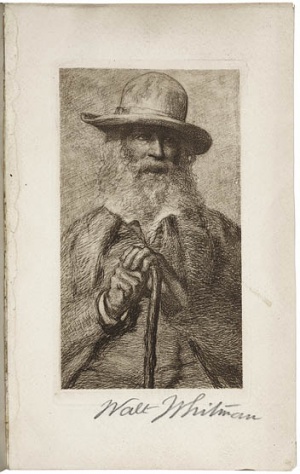 American poet Walt Whitman owned The Complete Works, signed the title page, and pasted in a piece he wrote on Shakespeare’s historical plays. The year before his death, he gave it to his friend, Philadelphia lawyer Thomas Donaldson, who wrote the first biography of Whitman. In 1893, Donaldson presented the book to English actor Henry Irving, whose bookplate is in the front of this copy. (An engraving of Whitman is also tipped in to this copy, and is seen to the left.)

Publisher John Dicks sold 700,000 copies of a cheap paperback edition of Shakespeare. The copy in this case was purchased by American actor Edwin Booth, who wrote his name on the cover and annotated several of the plays. He may have acquired the book in 1880, when he performed in London with British actor Henry Irving.

The Handy-volume Shakespeare was given to Robert Barrett Browning (a.k.a. Pen), son of the poets Robert and Elizabeth Browning, by his aunt, “dearest Arabel” in March 1868. Pen’s mother had died when he was only twelve. Her sister, Arabella Barrett, died seven years later, the same year she gave her nephew a thirteen-volume Shakespeare set. It was designed “for the Pocket, the Knapsack, and the Railway,” useful for travelers such as Pen, who became an artist.

Two of forty volumes of The Temple Shakespeare were given by President Franklin Delano Roosevelt to his mother, Sarah, in 1900. When he presented the set to the Folger Library in 1943, he wrote that it “was in her room at Hyde Park until her death in 1941.”

A Folger copy of the Globe Edition of Shakespeare’s Works belonged to English actress Ellen Terry. She has written “sitting room = Winchelsea – Aug. 92,” a reference to her home in Wincheslea, East Sussex. On the title page she wrote under Shakespeare’s name, “The poise of him=.” The bookplate inside the front cover shows a map of the town with the location of her house, and was one of several designed for her by her nephew, Gordon Craig, the artist and director.

Queen Victoria presented a nine-volume set of Shakespeare's Works to her cousin, Prince Louis Napoleon, on March 16, 1873. The specially-made binding has his initials “LN” entwined on the front and back covers. Her note, in French, says she gives this “with many wishes for every happiness on the part of your very affectionate cousin Victoria R.”

Click the linked heading to hear head of reference Georgianna Ziegler discuss one of America's great authors, Walt Whitman, and his fondness for Shakespeare in "O Captain! My Captain!"