Pericles, one of William Shakespeare's plays, tells of a prince who risks his life to win a princess, but discovers that she is in an incestuous relationship with her father and flees to safety. He marries another princess, but she dies giving birth to their daughter. The adventures continue from one disaster to another until the grown-up daughter pulls her father out of despair and the play moves toward a gloriously happy ending.

This play is far from typical of Shakespearean drama. In the opening lines, a speaker, using archaic language, introduces himself as the medieval poet John Gower. Gower then tells the tale, interspersed with dramatized or silent scenes; the effect is a narrative that periodically breaks into dramatic life. The approach is fascinating and fitting, since Pericles tells a romance tale associated more with storytelling than theater.

Because Pericles is so unusual, and was not printed in the 1623 First Folio, some scholars in the past argued that it is not by Shakespeare; others today insist that another playwright wrote much of it. Yet Pericles shares multiple features with many of Shakespeare's plays; it also presents the story in a highly experimental manner, like his other late plays. A good production has the strong emotional effect that one associates with Shakespeare.

Scholars suggest that Shakespeare wrote Pericles in 1607–08. A version of the play was published as a quarto in 1609. Sources include Confessio Amantis by the poet John Gower (who is also the play's fictionalized narrator) and Laurence Twine's The Pattern of Painful Adventures.[1] 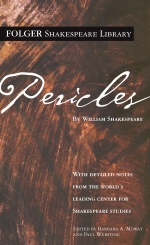 Pericles can be read online with Folger Digital Texts and purchased from Simon and Schuster.

The Folger owns at least 5 stand-alone translations of Pericles in various languages (not including collected works). Cataloging of these works is ongoing as of early 2015, and many have full-level catalog records, but some works still have only partial records. Translations can be found Hamnet in by searching for "Translations"in the Genre/Form Term field, or by searching the Call Number (Left-Anchored) field for call numbers starting with PR2796 (see the list of Sh.Col. translations call numbers for specific language call numbers). Since not all translations are fully cataloged, some items may only turn up in one of these searches.