This article offers a comprehensive and descriptive list of each piece included in Nobility and Newcomers in Renaissance Ireland, one of the Exhibitions at the Folger.

London: City of Two Realms (case 1 and wall after case 1) 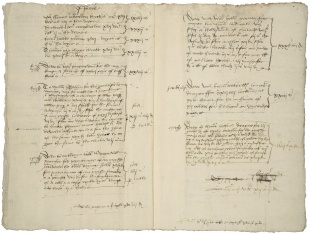 London bore a heavy Irish mark, politically and culturally, in the late Middle Ages and Renaissance. Richard Duke of York's return from Ireland in 1450, where he served as Governor and enjoyed great support, helped spark the Wars of the Roses. The first Tudor king, Henry VII, (crowned 1485), would in turn face two Yorkist invasions launched from Ireland. Ireland was made a kingdom by Act of Parliament in 1541, and the crown's efforts to control the western realm inspired sixteenth-century mapmakers and historians: Knowledge equals power, and the Tudor capital was awash in new maps, histories, ethnographies, and political treatises concerning Ireland and its governance. Literary London, meanwhile, played to popular sentiment and emphasized the exotic character of the Irish in prose, verse, and drama.

English and Irish noble connections played out in Dublin much as they did in London—at times harmonious, at times violently contentious. Founded by Vikings in the ninth century, Dublin was always an international settlement, and it became the de facto capital of the island by the time of the Anglo-Norman invasion in the late twelfth century. This first "English" conquest established intimate connections—by blood, marriage, and alliance—between nominally "English" and nominally "Irish" aristocracy. By the late Tudor period, the descendants of these two groups had become the "Old English" and "native Irish" (or "Gaels") respectively, and both were predominantly Catholic. The Tudor reconquest then introduced a (mostly Protestant) "New English" interest to this mingled society and thereby added a new level of complexity to cosmopolitan Dublin and the rest of the country.

Turmoil in the Pale: the Decline of Kildare (case 3 and wall above case 3)

The English Pale was an ill-defined legislative zone create in 1494 to protect Dublin's hinterland from what lay beyond. From its inception, the Pale was a site of cultural hybridity, political negotiation, and occasional rebellion. Most local nobles were of mixed English-Irish ancestry and they had to maintain allegiance to the distant English crown while living among the Gaelic neighbors, who had their own established language, laws and traditions. After Henry VIII's break with Rome, the nobles also had to defend their Catholicism against a state-sponsored Protestantism. The greatest of these families was the Fitzgeralds, earls of Kildare, who were among the most powerful and wealthy lords in all of England and Ireland. Until their rebellion in the 1530s, they regularly served as the English crown's cheif governors in Ireland. 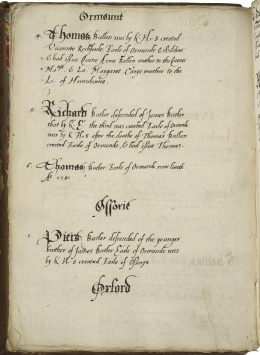 The genealogy of the earls of Ormond. Folger Digital Image 62635.

As their rivals the Kildares fell from grace, the earls of Ormond rose to fill their place as the crown's Irish favorite. The greatest of the Ormond earls was Thomas "Black Tom" Butler (1531–1614), tenth earl of Ormond. He was a cousin of Queen Elizabeth and a man of immense wealth, connection, and diplomatic skill across cultural lines. While the earl's brothers in Tipperary took up arms against the government in 1569, Black Tom was staunchly loyal and helped to supress his rebellious brethren. Ormond spent many years at court in London and he also owned property in England. His proximity to the queen and near total power over his Irish territories aroused the envy of rivals on both islands.

Rebellion in Munster: the Fall of Desmond (case 5)

Like Ormond and Kildare, the house of Desmond in the southwest had a long, wealthy, and proud history in Ireland dating back to the Anglo-Norman invasion. Unlike its rivals to the north and east, however, it did not survive the Tudor period. The fifteenth earl launched a major rebellion that was crushed in 1583, and the crown, on the grounds of treason, siezed the earl's property and that of his rebel associates. The Desmonds had been one of the wealthiest and most powerful families in England and Ireland in the mid-sixteenth century; by the early seventeenth century, they had become powerless, and their titles passed into the hands of Richard Preston, Lord Dingwall, one of King James's Scottish favorites.

Rise of the New English “New Men”: The Munster Plantation (case 6 and wall after case 6)

The death of the "Rebel Earl" of Desmond and that of many of his followers was a boon for newcomers. Almost half a million acres were siezed by the crown and distributed to those well-conected at cuort and those in government service, like the well-known poet Edmund Spenser. The result was Munster Planation, the largest colonial scheme in the country. It was based on humanistic and classical principles harking back to ancient Rome, as well as on modern surveying techniques. The primary goal of the Munster Plantation was to transform—with order, industry, and innovation—a supposedly savage, Catholic, backward, and degenerated Irish land into a Protestant and profitable realm that would be repeopled with English settlers.

Breaking the West: Queens, Captains, and Nobility in Connacht (case 7 and wall after case 7)

The province of Connacht experienced the same heady mix of negotiation, resistance, alliance, and violence that marked English–Irish contact in Leinster and Munster. Yet the government of Connacht was particularly prone to abuse by nominally loyal officials, many of them newcomers, who operated largely outside of crown control in remote parts of the realm. Not all of the entrenched local families in the west suffered in the late-Tudor and early-Stuart periods as a result, however. The O’Briens, a native Irish kingship of ancient ancestry, continued to rule as earls of Thomond and flourished during these turbulent times. They owed their success to their unswerving loyalty to the crown, but also in part to the fatal missteps of their rivals. 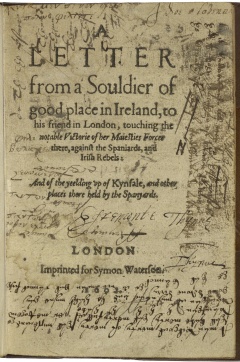 The heavily marked-up title page of A letter from a souldier of a good place in Ireland, 1602. Folger Digital Image 62671.

The Nine Years’ War (1594–1603) was a watershed conflict in Irish history and a major event in England, costing more than all of Queen Elizabeth’s previous military forays combined. It ruined the career of the dashing second Earl of Essex, the Queen’s final favorite courtier, and it concluded only a few days after Elizabeth’s death in London. Commanding the “rebels” was the wily and supremely capable Hugh O’Neill, Earl of Tyrone. The protracted conflict began in Ulster; had its climax at the Battle of Kinsale (1601), at the opposite end of the country; and reached its denouement back in Ulster. It led to the destruction of the Munster Plantation in the south and, after many punishments, pardons, and minor rebellions, the beginning of the Ulster Plantation in the north.

The end of the Nine Years’ War ushered in great change to Irish-English relations. Hugh O’Neill, Earl of Tyrone, surrendered mere days after the death of Elizabeth I, last of the Tudor monarchs. Irish nobles faced a new dynasty, centered around Elizabeth’s successor, James Stuart. King James was the first monarch to unite the crowns of Ireland, England, and Scotland. He claimed descent from the peoples of all three kingdoms, and he worked hard to maintain peace between and among them. He worked equally hard to make the Irish nobility loyal to him, which he did by giving noble titles to favorites and selling them to loyal servants with deep pockets.

The Irish nobility was an international one, and under the Stuart kings, many of its members moved outside of the realm. Sometimes their relocation was spurred by religious and political tensions: Many Gaelic lords fled to Continental Europe seeking the support of Catholic sympathizers. The momentous “Flight of the Earls” of Tyrone and Tyrconnell to Rome in 1607 is typically thought to mark the end of the Gaelic—and Catholic—order in Ireland. Sometimes flight was motivated by loyalty to England’s monarch, however, as when the Protestant Duke of Ormond joined his king, Charles II, in exile from Oliver Cromwell’s Commonwealth. Less well-known is the phenomenon of Irish nobles—both Catholic and Protestant—willingly leaving Ireland in order to be closer to the crown and court in England.

In 1607, the earls of Ulster abandoned their ancestral lands and moved to the Continent. This change had radical consequences for the north of Ireland as well as for the rest of the island. The crown read this move as proof of yet another plot between the earls and the Spanish against the English state. The ancestral territories of the O’Neills, O’Donnells, Maguires, and their supporters therefore fell to the crown, which turned these lands into the Ulster Plantation, a colonization scheme on an unprecedented scale in Ireland. British law and investment were introduced, and the region, which was previously deemed the most uncivil and intractable in Ireland, was newly populated with English and Presbyterian Scots settlers.

Land and Law: The New Nobility (pilaster after case 11, case 12, and vitrine after case 12)

The pedigree of the family of the Taylors of Shadoxhurst, 1665. Folger Digital Image 14470.

The defeat and exile of the Ulster earls caused revolutionary changes in landownership in the north and elsewhere in Ireland. The social landscape also underwent radical change, as the Stuarts worked hard to fashion a new nobility, like-minded and loyal. Whereas Elizabeth had been stingy with elevations to the nobility, James gave his subjects what they wanted. However, what began as a social good—the elevation of the loyal and deserving—quickly turned sour as the regime handed out titles to favorites and sold others to the highest bidders. Because of the new vacancies, Ireland typically served as the site of these new ennoblements. The crown even created a new category of minor nobility, the baronet, which could be peddled to social climbers with deep pockets, a development that scandalized the “ancient” nobility.

Stuart Dublin was a very different provincial capital than Tudor Dublin. Military “pacification” of Ireland and the attendant process of “Anglicization,” as envisioned by New English policymakers like Edmund Spenser, Richard Beacon, and Sir John Davies, reshaped the social, cultural, and political landscapes of the city. The 1630s witnessed stunning growth and change for the capital. Under the stern viceregal eye of Sir Thomas Wentworth—close advisor to Charles I, and eventual Earl of Strafford—Dublin became a site of theater, learning, and high society. It also became a place of high political intrigue as Wentworth tested the king’s preference for absolute rule. Simultaneously, nobles of all backgrounds convened in Dublin during Charles’ reign.

The London of the early Stuarts was truly an imperial center. Henry VIII may have made Ireland a kingdom, but James and his son, Charles I, governed over England, Ireland, and Scotland and, thus, over the budding British Empire. The imperial crown demanded religious and cultural uniformity of the entire population, not simply the loyalty of elites. Consequently, it had to defend the legitimacy of its claim to Ireland on ideological as well as political grounds. The Stuarts did, however, enjoy significant support among Irish nobles, some of whom made London their home. Ireland and the Irish would continue to influence the capital into the modern era.