On Friday, September 15, 2017, the Folger hosted the DC chapter of Nerd Nite, part of the Talks and Screenings at the Folger. The event was held in the historic Paster Reading Room.

The popular lecture series, Nerd Nite made it way from its regular location on U Street NW to Capitol Hill for an evening exploring all of the nerdy ways science and humanities can combine to make great things happen. Guest lecturers led audiences Hollywood with the National Academy of Science’s Science and Entertainment Exchange, into the vaults of libraries around the globe to uncover the secrets behind Shakespeare’s coat of arms, and to 20th century Europe as physicist Lise Meitner came alive on stage.

Nerd Nite DC is part of a global network of Nerd Nites for people who love to think, explore, and learn while having a few drinks and meeting new friends. Nerd Nite DC hosts live slideshow presentations on nerdy topics at DC9 the second Saturday of every month, with the occasional musical act, swing dance demonstration or complete-your-own-sonnet contest thrown in for kicks. The DC chapter of Nerd Nite is managed by co-bosses Aaron Huertas and Cat Aboudara. To learn more about the Nerd Nite network and its DC chapter, visit their website.

How a Battle Between Two Violent Heralds 400 Years Ago Helps Us Understand Shakespeare Just a Little Bit More… or, How a Headline Got Me in Trouble with the Anti-Shakespeareans by Heather Wolfe

Compared to most people from 400 years ago, we know a ton about Shakespeare. We know when he and his children were baptized, married, and buried. We know the house where he was born, what school he attended, where he lived in retirement, and the church where he was buried. We can read his will, property deeds, and tax records, as well as his plays and poetry and the commentary of contemporary critics and admirers of his work. We also have a set of documents, some of them recently discovered, that reveal Shakespeare’s desire to create a lasting reputation for himself and his daughters’ families, through the acquisition of a coat of arms. Heather Wolfe takes us deep into the archives to tell the sordid tale of the cantankerous herald who granted Shakespeare’s father a coat of arms in the first place and the equally cantankerous herald who attempted to discredit the grant. Along the way, she’ll explain how the media’s obsession with the Shakespeare authorship question forced her to defend and explain the manuscript evidence very, very, very carefully.

Heather Wolfe is curator of manuscripts at the Folger Shakespeare Library, where she has worked since 2000. She learned how to read and love Renaissance handwriting and manuscripts while getting her PhD in Renaissance English Literature at the University of Cambridge, followed by an MLIS at UCLA. She is the curator of Shakespeare Documented and the principal investigator behind Early Modern Manuscripts Online, a project to crowdsource, transcribe, and publish online as many English manuscripts from the sixteenth and seventeenth centuries as humanly possible. When she’s not in the vault, she’s seeking out new local breweries, sleeping in the woods, and training for long distance races. 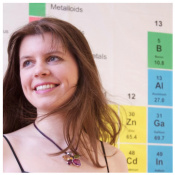 In December 1938, Lise Meitner discovered the process of nuclear fission. Having fled to Sweden to escape anti-Jewish persecution, the Austrian-German physics professor changed the course of science and the world in many ways. Through a living history portrayal by MIT astrophysicist Anna Frebel, the audience will participate in this discovery and its consequences. The scene then changes to 2017. Astrophysicists use cosmic objects and modern knowledge on fission to finally complete, some 80 years later, our understanding of the production of all the heaviest elements in the periodic table.

Anna Frebel is an Associate Professor of Physics at MIT. She received her PhD from the Australian National University and did postdoctoral work at the University of Texas (Austin) and the Harvard-Smithsonian Center for Astrophysics. For her research into the oldest stars in the universe and the early evolution of the chemical elements, she has received numerous scientific awards. In 2016, she was named one of ScienceNews Magazine's 10 scientists to watch. She is the co-founder of STEM on Stage, a STEAM initiative to promote narrative science through living history theater and film. Frebel is also the author of the popular science book Searching for the Oldest Stars: Ancient Relics from the Early Universe.

Ann G. Merchant joins us from The National Academies of Science, Engineering, and Medicine, perhaps one of the nerdiest places to work in all of Washington, DC and Ann Merchant has been there for… well, for a really long time, so she would know. But nerds are pretty glamorous these days and geeks are super chic so it may not be especially surprising that her job as the Deputy Executive Director for Communications is actually pretty cool. When she’s not hanging out in Einstein’s lap chatting about E=mc^2 and gravitational waves with visitors who come by the National Academy of Sciences building for a photo of the famous bronzed scientist, she’s at her desk (or more likely on an airplane) working on a variety of innovative outreach programs that are designed to make people fall in love with science.

In 2008, she spiked the water in a committee meeting with a secret combination of tasteless herbs and roots that made the attendees strangely agreeable and especially brave and got everyone to vote yes on launching a formal collaboration between the NAS and members of the Hollywood creative community. Or maybe it was the data and research she provided that demonstrated the power that film and television have to influence public perceptions, attitudes, and even behavior. Regardless, The Science & Entertainment Exchange was born and she was ultimately instrumental in launching and now overseeing this program that connects entertainment industry professionals with top scientists and engineers. She does lots of other stuff too but no one really cares about that because The Exchange is way more interesting.