Difference between revisions of "Much Ado About Nothing"

Much Ado About Nothing, one of William Shakespeare's plays, includes two quite different stories of romantic love. Hero and Claudio fall in love almost at first sight, but an outsider, Don John, strikes out at their happiness. Beatrice and Benedick are kept apart by pride and mutual antagonism until others decide to play Cupid.

Over the centuries, the Beatrice-Benedick plot has most captivated audiences and readers. It is, however, the conjunction of Beatrice and Benedick with Hero and Claudio that makes Much Ado so rewarding. As Beatrice and Benedick learn to “suffer love” together, Claudio and Hero become acquainted first with life’s darkness and then with unexpected joy. While the play calls itself "Much Ado about Nothing,” its stories are actually about life at its most important.

Much Ado About Nothing was printed as a quarto in 1600, and was probably written in 1598–99. Shakespeare relied upon many sources, including Ariosto's Orlando Furioso and Edmund Spenser's The Faerie Queene.[1] 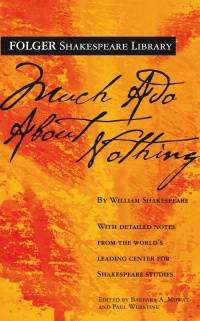 Much Ado About Nothing can be read online with Folger Digital Texts and purchased from Simon and Schuster.