Difference between revisions of "Mistress Quickly"

"Quicklyisms": Mistress Quickly is known for humorous malapropisms, such as "honeyseed" and "hempseed" for "homicide" (2HenryIV, 2.1.53, 59) 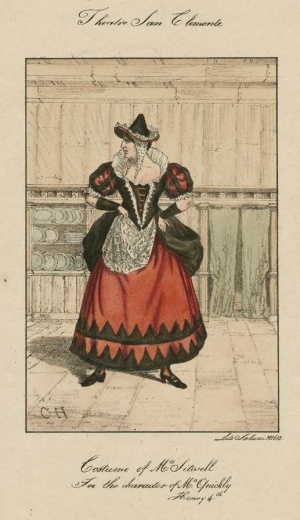 "Mistress Quickly" in a lithograph from the 1830s

A sampling of visual depictions of Mistress Quickly in the Folger's holdings, via Luna.

Before the Folger could create a nationally-recognized subject access point for Mistress Quickly, cataloging rules said we had to decide if she was one character (in which case her name could stand on its own), or two characters (in which case the names of the associated plays needed to be part of her subject entry). The consensus was that Mistress Quickly is one character (a lower-class woman named Mistress Quickly who comically mixes up words when speaking) but two people (hostess of a tavern in Henry IV and Henry V; housekeeper to Dr. Caius in Merry Wives) and "neither [Shakespeare] nor his audience was distressed by the inconsistencies this involves."[1] This fits with the way that Shakespeare saw her: as a stock character. The fact that "Mistress Quickly" keeps a tavern in some plays and is a housekeeper in another is like Pierrot being the same character in different plays. A researcher looking for a specific instance of Pierrot would include the name of the play in their search; someone looking for Pierrot as a generic character wouldn't. Accordingly, Folger catalogers established the access point: Quickly, Mistress (Fictitious character).