Miss Orlebar copy of the Pavier quartos: Difference between revisions 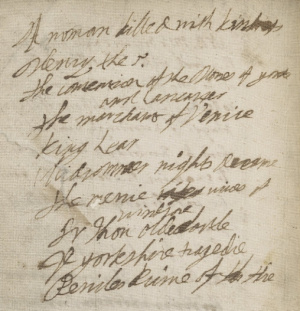 Quarto lot 1452/3 in A Catalogue of the entire Libray of Dr. Thomas Goodman, Late Physician in Ordinary to His Majesty...to be Sold by Auction...at Fletcher Gyles's.[2]

NB. Miss Orlebars made me a present of this book with a view that I shd. give it to my friend Mr. Garmer, who was collecting Quarto Editions of Shakespeare plays. I accordingly sent it dow[n] [t]o him at Cambridge, but whe[n] [h]e came to examine the volume he found that he was already possessed of every play in it except King Lear, which he therefore took out, & sent me back the Volume. [two and a half lines of text that was later obliterated follow]. May 8. 1763. T. P.[3]

The eight plays remaining in the collection after A Woman Killed with Kindness, King Lear, and A Yorkshire Tragedy had been removed were re-bound around 1850 (date of rebinding estimated by Folger staff member Giles Dawson in 1963), maintaining the order of the manuscript table of contents.[4]

For the Earl of Caledon's possession of the volume, see an article by Van Lennep in the 1964 Shakespeare Quarterly anniversary volume.[5]