Difference between revisions of "Mazarinades" 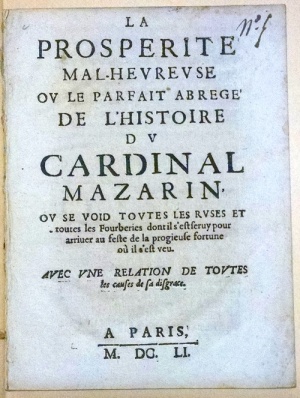 The Folger holds 2,650 editions among its thousands of copies (3,237 were known of at the time the project began). The Mazarinades have not been systematically cataloged and therefore are mostly not to be found in the Folger’s online catalog, Hamnet. (A checkmarked copy of the nineteenth-century bibliography by Celestin Moreau and others, kept in the Acquisitions Department, provides the authoritative record of the Folger's Mazarinade holdings.) In recent years, new Mazarinades acquisitions have been described in Hamnet, but these represent only a small fraction of the Folger holdings.