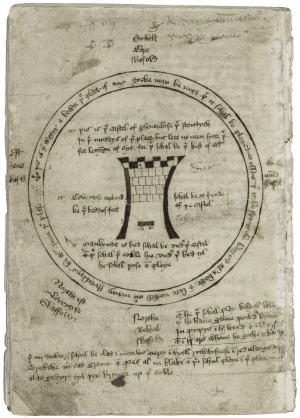 On March 30th 1936, the three plays were purchased together by the antiquarian firm of Bernard Quaritch at a Sotheby's auction[1]. Joseph Quincy Adams purchased the manuscripts from Bernard Quaritch shortly after the latter had acquired them in August of 1936 for for $5,625 USD/£1125 GBP. In a letter to Amherst College President Stanley King, Adams described the decision to make the purchase in a letter dated August 29th, 1936: "I tried to get Quaritch to give the Folger Library an option for the manuscripts until September 1, but this he refused to do, for he hoped that they would be acquired for the British Museum. I could secure the three manuscripts for $5,625, and having been granted by the Trustees $10,000 for the purchase of new material, I decided to take the matter at once under careful advisement. I went to my hotel, and spent most of the night considering the matter. The more I thought, the more convinced I became that I should not let this remarkable opportunity slip through our fingers. The price was extremely reasonable; indeed, in my judgement, $25,000 would not be unreasonable. And so, early on the following morning, I took a taxi, drove to Quaritch's shop, and completed the purchase. The manuscript reached the Folger Library before I did, and created something like a sensation with Dawson, Willoughby, and McManaway. They were not only delighted, but astonished at the smallness of the cost. We all agree that the three items constitute the most important manuscripts in our keeping. Their presence here adds a new distinction to the Library, and I feel great pride in having acquired them. We stole a march on the English people!"