Difference between revisions of "Lost and Found: A Manuscript Grimoire"

Curator of manuscripts Heather Wolfe selected a sixteenth-century illustrated manuscript grimoire, or book of magic, for The Curatorial Eye: Discoveries from the Folger Vault, part of the Exhibitions at the Folger. This grimoire contains detailed instructions for invoking spirits and casting spells. Through the magic of various invocations, the user could cure sickness, catch thieves, or find love. The manuscript was well-used: successive generations of readers added notes to the margins, and one user supplied page numbers in a distinctive blue ink. In the early nineteenth century, the first fourteen pages and the final thirty pages were removed, and the Folger Shakespeare Library purchased this incomplete version of the manuscript in 1958. We were able to add the missing final pages to the collection after successfully bidding on them at a 2007 auction in London. This ‘lost’ portion of the grimoire was identifiable by its blue page numbers and other external and internal evidence. We are still searching for pages one to fourteen. 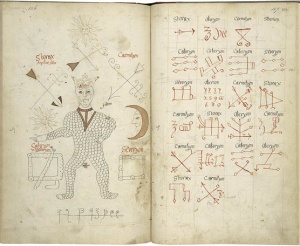 In the opening seen to the left--from the main part of the Book of Magic--the spirit Oberyon is surrounded by the seals and characters of his four angels. Oberyon could be summoned if the conjurer recited a series of prayers and conjurations while standing in a magic circle, looking to the east, burning a piece of elder or thorn, and holding images of Oberyon and his angels inscribed on wood or brass. When Oberyon emerged from a little cloud, the conjurer was cautioned not to talk too much with him, “for hee will Reporte to thee Incredible thinges.”

The ABRACADABRA spell appears on the bottom of page 206, the first page of the last part of the manuscript which the Folger acquired in 2007, shown through the linked Shelfmark 263493. A magician could cure a sick person without that person’s knowledge by each day scraping out successive lines of the word ABRACADABRA, written on virgin parchment, while reciting the provided spell.

Astrology had a strong influence on magic in early modern England. Each hour and day of the week was ruled by one of the seven planets: the sun, the moon, Mars, Mercury, Jupiter, Venus, and Saturn. The table, “to knowe what planett doth Rulle every houre both day and night,” was an essential tool for determining when to perform a specific experiment or ritual, shown through the linked Shelfmark V.b.26 (1). The success of an experiment depended on whether it took place under the appropriate astrological conditions—the most suitable planet, element, and zodiacal sign.

The circular “Table of everie thinge of everye Spheere” allows the user to predict a wide variety of occurrences, including whether someone will recover from a sickness, who will win a fight, if a woman is pregnant, if she is having a boy or girl, whether the husband or wife will die first, whether a man will travel safely, whether he will study or take a benefice, whether a runaway servant will return, and whether one will have good fortune while gambling, shown through the linked Shelfmark V.b.26 (2).

Magic circles were drawn on the ground or on a piece of parchment in order to summon angels, spirits, or demons to assist the magician with his work. The two circles are to be used to summon the spirit Birto “to make aunswere to any Question to be demaunded” on the second, fourth, sixth, tenth, or twelfth day of the month, when the air is clear, shown through the linked Shelfmark V.b.26 (1). The summoner was instructed to sit in the right-hand circle on his knees and repeat three times the provided prayer, psalm, and conjuration. Birto would then appear in the form of a man in the other circle.