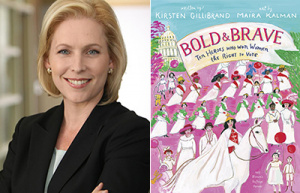 BOLD & BRAVE: Ten Heroes Who Won Women the Right to Vote is an inspiring book for children that looks at ten influential suffragists. It was written by U.S. Senator Kirsten Gillibrand (D-NY) who was inspired by her own great-grandmother, grandmother, and mother to be bold and brave - to stand up for what she believes in. BOLD & BRAVE tells the stories of ten leaders who strove to win the right to vote for American women - a journey that took more than seventy years of passionate commitment. The diverse group of featured women in BOLD & BRAVE are Susan B. Anthony, Lucy Burns, Jovita Idar, Inez Milholland, Alice Paul, Elizabeth Cady Stanton, Mary Church Terrell, Sojourner Truth, Harriet Tubman, and Ida B. Wells.