This article is about Shakespeare's play. For other uses, see King Lear (disambiguation).

One of William Shakespeare's plays, King Lear, challenges us with the magnitude, intensity, and sheer duration of the pain that it represents. Its figures harden their hearts, engage in violence, or try to alleviate the suffering of others. Lear himself rages until his sanity cracks. What, then, keeps bringing us back to King Lear? For all the force of its language, King Lear is almost equally powerful when translated, suggesting that it is the story, in large part, that draws us to the play.

The play tells us about families struggling between greed and cruelty, on the one hand, and support and consolation, on the other. Emotions are extreme, magnified to gigantic proportions. We also see old age portrayed in all its vulnerability, pride, and perhaps, wisdom--one reason this most devastating of Shakespeare's tragedies is also perhaps his most moving.

Scholars believe Shakespeare wrote King Lear in 1605 or 1606. It was performed at court in 1606, and a version was first published in 1608 as a quarto. Sources include an earlier play, The True Chronicle History of King Leir, Raphael Holinshed's Chronicles, Sir Philip Sidney's Arcadia, Edmund Spenser's The Faerie Queen, and The Mirror for Magistrates.[1] 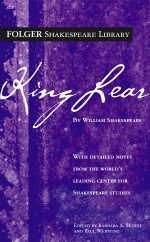 King Lear can be read online with Folger Digital Texts and purchased from Simon and Schuster.

The Folger owns over 120 stand-alone translations of King Lear in various languages (not including collected works). Cataloging of these works is ongoing as of early 2015, and many have full-level catalog records, but some works still have only partial records. Translations can be found Hamnet in by searching for "Translations"in the Genre/Form Term field, or by searching the Call Number (Left-Anchored) field for call numbers starting with PR2796 (see the list of Sh.Col. translations call numbers for specific language call numbers). Since not all translations are fully cataloged, some items may only turn up in one of these searches.