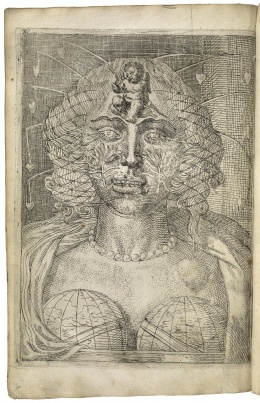 A literal depiction of 17th-century ideals of feminine beauty in The extravagant shepherd: or, The history of the shepherd Lysis, 1654. Folger Digital Image 6873.

Curated by Rachel Doggett, Jean Miller, and Francie Owens, Housewife's Rich Cabinet: Remedies, Recipes, & Helpful Hints, part of the Exhibitions at the Folger opened on August 27, 1997, and closed on January 31, 1998. The exhibition catalog can be purchased from the Folger Shop, and includes a variety of recipes from books and manuscripts in the Collection.

Have you ever wondered how Shakespeare's contemporaries dealt with toothaches and other ills, with cleaning their houses and clothing, and preserving food? If so, explore the contents of The Housewife's Rich Cabinet: her medicines, perfumes, cosmetics, cleaning solutions, pest controls, and preserving hints, as they are recorded in 90 books and manuscripts of the 16th through the 18th century on display in the Library's Great Hall. A number of the recipes were tested by a volunteer, and observant viewers saw the results.

Tudor and Stuart women were raised to be good housewives. They were instructed in cooking, baking, brewing, distilling, preparing medicines, and caring for the sick. They were also taught to be obedient, modest, temperate, and patient. A good wife was, in Shakespeare's words, "both dame and servant" to her husband. While many women could not read and depended on instructions handed down by word of mouth, others could turn to printed books or to handwritten volumes of recipes which they and members of their families compiled.

Housewife's Rich Cabinet: Remedies, Recipes, and Helpful Hints illustrates her duties, the skills she was expected to have, her sources of information on the properties of herbs and other ingredients, and the recipes compiled for her and by her.

For keeping their houses clean and bright, housewives concocted mixtures from ingredients at hand—in their gardens, meadows, and ponds. Looking after the kitchen garden of herbs was one of a women's many duties. She also looked after the bees, fattened the chickens, milked the cows, and gathered the plants that became the ingredients for her cosmetic, medicinal, and cleaning preparations. Recipes for preserving her produce were particularly valuable. Numerous books give directions for drying or making conserves of herbs, for candying flowers, and for drying fruits, pickling vegetables, preserving eggs, and salting meats. Instructions for discovering "defects" in dried hams and bacon and for "recovering" tainted flesh, oil, cider, and wine occur frequently, indicating that efforts to preserve food were not always successful.

Keeping garments stain-free and bright was a challenging and time-consuming duty. In addition to soap and water, the housewife used other ingredients common to her household: ashes, alum, bread, gum dragon, urine, vinegar, and the whites of eggs. Mother nature provided the bleaching power of the sun. The recipe for whitening cloth from a manuscript cookery book of the late 17th and early 18th century also calls for "blue water," water tinted with indigo to counteract a yellowish tinge in white fabric.

Ridding Your House of Troublesome Bugs 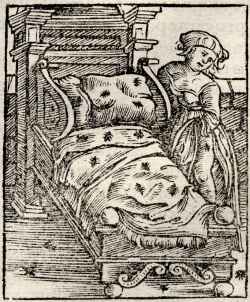 A housewife must rid her living space of bedbugs. Detail from page 33 of Hortus sanitatis, 1536. Folger Digital Image 6875.

Tudor and Stuart ideas about sanitation were far different from ours. In city streets the dung of animals mingled with refuse thrown from nearby houses, attracting insects and vermin. People seldom bathed and rarely changed their bedding or the rushes on their floors. They accepted the resulting fleas and lice as a normal part of their life, but they created numerous concoctions and contrivances to outsmart them.

Ridding her house of "troublesome bugs" was part of the housewife's daily ritual of cleaning. Many books offered sophisticated means of killing pests with deadly herbal and chemical concoctions, but the woman pictured in John Heywood's The Spider and the Flie (London, 1556) is taking the direct approach. The Compleat English and French Vermin-Killer (London, c. 1707), offers another method to destroy house bugs: "Take gunpowder beat small and lay some about the crevices of your bedstead, and fire it with a match..., and keep the smoke in. This do for a hour or more, and let the room be kept close for some hours after."

Whether they were preparing for humble gatherings or elaborate feasts, English women could draw on a wide variety of festive recipes to enliven their tables: salads of flowers and herbs, exotic new foods like turkey, and sweetmeats of all sorts. Presentation was important. Each course had its proper layout, napkins were folded in "the forms of sundry creatures" and meat was ceremonially carved.

The illustration of a meal in Thomas Fella's A Book of Diverse Devices (manuscript, 1585-98, 1622) reveals details of a typical period table setting: square trenchers (wooden plates), knives to spear and bring food to the plate, a covered salt cellar, one fork (for cooking, not eating), and one cup to be shared. The beverage in another cup is being mulled at the fire, and a dog eagerly awaits tidbits.

Every Housewife Made a Doctor

"One of the ... principal virtues which doth belong to our English housewife," Gervase Markham declared in The English House-wife (1631), is the "preservation and care of the family." For her "many wholesome receipts or medicines," she used simples (medicinal herbs), fruits and vegetables, and animal products such as innards, urine, and dung.

Take the sole of an old shoe worn by a man much used to travel; cut it into pieces, and burn it, yet neither to grey or white ashes, but to a friable and tender coal. Reduce it into an impalpable powder. Take then unsalted hog lard, and work it to an ointment, and anoint the afflicted part often therewith.

Picked from her own garden or bought from an apothocary, English housewives used herbs and medicines to care for their families, preserving their health when they were well and doctoring their pains, when they weren't. 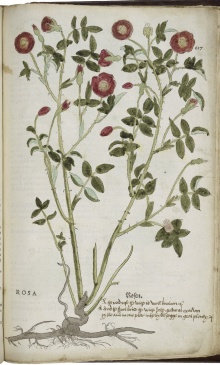 God was praised whenever a mother and child safely passed through the perils of childbirth, but many children and the women who bore them did not survive. The skills of a good midwife were crucial to housewives, who were nearly always pregnant. Even though midwives rarely knew Latin (the language of medicine) and were denied much of the knowledge available to male physicians, they drew on a long oral tradition. By the 17th century, midwives and the women they served could consult published texts in English. There they could find instructions on the care of mother and infant, advice on choosing a mate and insuring the birth of a male child, "antidotes to venerie," and the methods to avoid having a child at all.

How to Make a Young Face Exceedingly Beautiful

The ideal of feminine beauty in the 17th century demanded that women have the characteristics that are literally depicted in this illustration from Charles Sorel's The Extravagant Sheperd (London, 1654): teeth like pearls, eyes that sparkle like the sun, eyebrows arched like Cupid's bow, cheeks a-bloom with roses, and breasts like little globes or, as one writer put it, "little worlds of beauty."

In reality, personal allure may have suffered in an age when baths were infrequent and sanitation almost nonexistent. Women young and old made pomanders and sweet bags and fumigated their clothes presses with herbal scents. They perfumed gloves and, when their breath smelled of "old Saturn's sweaty socks," they concocted breath fresheners to disguise the odor of rotting teeth. A sweet-smelling pomander worn about the neck or dangled from the waist did more than perfume the "pestiferous and corrupt air." Its fragrance could entice many a swain. "Pomander bracelets...take men prisoners, for none can have the courage to resist."

Painting, according to John Stalker in his Treatise of Japanning and Varnishing (1688), is a "magic art" that renews not only old age,"but happily prevents grey hairs and wrinkles." Whether they sought an antidote to aging or simply delighted in the activities themselves, women of the 17th century pursued the decorative arts with great enthusiasm. They decorated bowls and picture frames, created wax fruit, experimented with colors and dyes, marbleized wood, traced engravings, and even told stories with the prints they arranged on the walls of their rooms.