Difference between revisions of "Here Is a Play Fitted: Four Centuries of Staging Shakespeare" 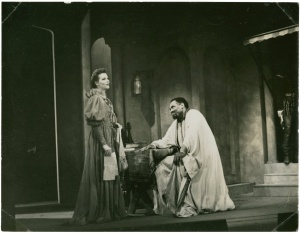 Here Is a Play Fitted: Four Centuries of Staging Shakespeare, one of the Exhibitions at the Folger opened October 1, 2013 and closed January 12, 2014. Here is a Play Fitted, a backstage tour of four centuries of Shakespeare in performance, takes its name from a line in A Midsummer Night's Dream.

Using historic costumes, set designs, videos, letters, and much more, the exhibition traces the entertaining, and poignant, stage histories of Othello, Richard III, Romeo and Juliet, and A Midsummer Night's Dream. Along the way, it reveals how much Shakespeare has changed on stage in every era, from Restoration rewrites to a nineteenth-century actress as Romeo, and from Paul Robeson breaking racial barriers as Othello to the newest ideas of today.

The exhibition was curated by Denise A. Walen with exhibition assistance from Alan Katz.

Denise A. Walen is an Associate Professor in the Department of Drama at Vassar College where she teaches courses on dramatic literature, theory, and theatre history.

Her current research focuses on the performance of early modern drama.

She is the author of articles and reviews in Theatre History Studies, Theatre Survey, Theatre Journal, and Shakespeare Quarterly, as well as chapters in Women and Playwriting in Nineteenth Century Britain (Cambridge University Press) and Passing Performances: Queer Reading of Leading Players in American Theatre History (University of Michigan Press).

Dr. Walen served for several years as the Performance Review editor for Theatre Journal, and is currently on the editorial board of TRM.

She is the author of Constructions of Female Homoeroticism in the Early Modern Drama (Palgrave, 2005). 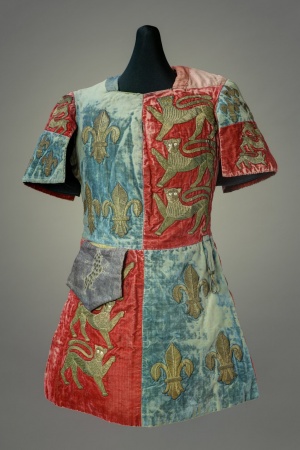 "People who may have read one or more Shakespeare plays, and have seen a stage or a movie version, rarely realize they are seeing a version of the play, not a stable, unaltered text or script," says Denise Walen, curator of Here is a Play Fitted. The plays have almost always "been edited, changed, and rearranged," she says. "There's some quality in the plays that makes them open, flexible, and interesting."

Alterations in the text, of course, are just one way that Shakespeare productions have varied over the past 400 years, from the "pictorial" era that emphasized visual tableaux to recent productions that explore religious, gender, or racial themes. Each era's approach to Shakespeare, she points out, reflects broader theater trends. "Shakespeare has kept in step with changes in the theater itself," she explains. "Shakespeare reflects the time in which he's performed; he responds to the culture in which he's produced. "

The challenging work of studying past Shakespeare productions, Walen says, often starts with promptbooks—"fascinating documents, records of actual performances" that include cuts, actors' positions and movements, and more. Often, she says, they reveal "the real humanity of these productions, the very personal reasons for choices." One Folger promptbook in the exhibition includes a "touching and sad notation about Edmund Kean's collapse on stage" while playing Othello (Kean died not long after). Promptbooks for other playwrights often no longer exist. But for managers staging Shakespeare's plays, she says, "what they were doing was very significant. They kept the promptbooks, shared them with other actors, made beautiful designs, kept other materials like lists of costumes and props with them."

In addition to its many Shakespeare promptbooks, the Folger has a "huge abundance" of other theater history artifacts, says Walen, including costume and set designs, playbills, photographs, and more, adding details about past productions. For the exhibition, "the challenge was picking and choosing. I had so much fun finding all of it. I love the costumes, especially the costume of Edwin Booth, one of the most important American actors, as Richard III. It's a wonderful visual representation."

As for the promptbooks, "I do like the rabbits," Walen says, referring to a 1911 production of A Midsummer Night's Dream by Herbert Beerbohm Tree. "It's a production that I've read about for decades. There were live rabbits onstage. I was so excited to find the promptbook that talks about a rabbit, and about the rabbit's movements on stage, almost like an actor." Although the promptbook doesn't explain how such plans were implemented, she says, "There's a tradition that they used trails of bran for the rabbits to follow."

From rabbits to royal costumes to productions in the new millennium, Walen hopes the centuries of productions on view "will open visitors' eyes to the variety of Shakespeare in performance. When people go to see a movie or a stage performance, I hope they pick up the play, to discover the differences and similarities to an edited version of the text. Not to make a value judgment, but to see what new understanding the production brings to the play. How it illuminates the narrative."

With so many variants of "Shakespeare" over the past 400 years, what might future productions be like? "There's no telling what's next," says Walen, "But I firmly believe he will be there. There are so many ways Shakespeare can be performed. That's what keeps him alive as a playwright. He's always interpreted, always played with. Whatever changes in the theater and in audience expectations, I feel certain Shakespeare will be there."

What constitutes a Shakespeare play? Is it the text in print or the performance on stage? And how does a stage performance differ from the printed text?

The earliest texts—the quartos and folios—represent multiple versions of many of Shakespeare’s works and result in unstable textual variants that offer significant alternatives. The plays in performance are further interpreted and filtered through production. These interpretations are influenced by shifts in cultural sensibilities, the personal interests and talents of individual artists, and the physical and technological conditions of the theater. In order to make Shakespeare’s plays accessible and appealing to audiences over several centuries, theater practitioners have shaped both the text and style of production to fit the fashion, preferences, and understanding of their times. In essence, the multiple versions of Shakespeare’s works are reconstituted and recreated each time actors, directors, and designers prepare and mount a new production.

Here Is a Play Fitted highlights the broad shifts in the theatrical productions of four plays by Shakespeare: Othello, Richard III, Romeo and Juliet, and A Midsummer Night's Dream. Designs for sets, lights, and costumes, production images, props, models, playbills, letters, reviews, and promptbooks shed light on the motivations behind the sometimes surprising changes made to the texts for performance.

Explore the exhibition, Here Is a Play Fitted, through this mobile tour.

Learn more about a surprisingly ripe discovery during the exhibition's installation on the Folger Library's blog, The Collation.

Listen to curator Walen discuss how the Romeo and Juliet first quarto is nearly 800 lines shorter than the version in the First Folio.

Hear curator Walen discuss an Othello promptbook as it would have been performed—heavily cut—in the 1670s and 80s.

Listen to curator Welan discuss Paul Robeson, who was the first black actor in the United States to be seen as Othello in a major production of the play, and hear a clip of his rendition.

Hear curator Welan discuss Laurence Olivier's productions of Richard III as it was performed on stage in 1945 before it was adapted for film in 1955.

Learn how David Garrick changed Shakespeare. Curator Denise A. Walen looks at Garrick's 1754 adaptation of Romeo and Juliet in which the young lovers get to speak to each other one more time before their tragic death, an idea that Baz Luhrman later adapted for his 1996 film. With actors Michael Goldsmith and Kate DeBuys

Curator Denise A. Walen explores the significance of the tunic worn on stage by Edwin Booth in his performances of Richard III.

In 1904, Henry Folger saw Julia Marlowe and E.H. Sothern's original production of Romeo and Juliet—both the opening and closing performances. Curator Denise A. Walen shares a letters between the library founder and actress.

Learn more about Lynn Redgrave's one-woman show, Shakespeare for my Father, from curator Denise A. Walen. The play, an early version of which performed on the Folger stage, ran for nine months on Broadway and was nominated for a Tony award.