This article is about Shakespeare's play. For other uses, see Henry VIII (disambiguation).

In Henry VIII, one of William Shakespeare's plays, Shakespeare presents a monarchy in crisis. Noblemen battle with Lord Chancellor Cardinal Wolsey, who taxes the people to the point of rebellion. Witnesses whom Wolsey brings against the Duke of Buckingham claim he is conspiring to take the throne, yet Buckingham seems innocent as he goes to his death.

Henry is also without a male heir. After meeting the beautiful Anne Bullen, he says that he suspects his current marriage to Katherine, with whom he has one surviving daughter, is invalid. Katherine, meanwhile, glows with such splendid integrity that actresses have long desired the role. She advocates for the people, suspects the witnesses against Buckingham, and eloquently defends her conduct as Henry's wife.

Henry VIII was first performed in 1613. During a performance on June 29, a cannon fired from the stage started a fire, burning down the Globe; no lives were reported lost, and a new Globe was constructed. The play was printed in the 1623 First Folio. The primary source is Raphael Holinshed's Chronicles.[1] 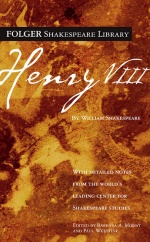 Henry VIII can be read online with Folger Digital Texts and purchased from Simon and Schuster.

The Folger owns at least a dozen stand-alone translations of Henry VIII in various languages (not including collected works). Cataloging of these works is ongoing as of early 2015, and many have full-level catalog records, but some works still have only partial records. Translations can be found Hamnet in by searching for "Translations"in the Genre/Form Term field, or by searching the Call Number (Left-Anchored) field for call numbers starting with PR2796 (see the list of Sh.Col. translations call numbers for specific language call numbers). Since not all translations are fully cataloged, some items may only turn up in one of these searches.